The Perks of Being President

The only thing I'm President of is the Highland Restoration Association, an organization that for 35 years has worked to revitalize the historic Highland area.  I work extremely hard at this unpaid position, but there are some perks to the gig--I get to see inside and outside some incredible Highland properties and meet the awesome people living in our neighborhood!

We are currently working on a Highland Garden Tour scheduled for May 18.  Seven neighborhood gardens will be featured, and it is going to be a memorable and fun-filled event--it's this year's version of the Highland Experience.  For two Sundays now, the committee has toured potential garden sites and occasionally gotten to tour inside the houses with the gardens.  Last Sunday I got my wits about me and snapped a few quick shots with my IPhone.

Tour participants will not be touring the homes during our May event--so here's a sneak look inside one of the homes constructed in an old fire station, plus a couple views from tour gardens as the home owners work to get their outdoor spaces ready for the tour.

Now a preview of a couple gardens tucked away from sight in Highland.

Ink in My Veins


﻿
Gil Stephenson was my great-grandfather.  According to the book, Hello Towns, by Sherwood Anderson, Gil was a child factory worker in the era shortly after the civil war, and he continued to work hard all his life.  Eventually Gil founded a newspaper, the Marion Democrat, in his and my hometown of Marion, Virginia.   Gil set the type and ran the newspaper with the help of his wife and children.    He eventually sold the paper to Sherwood Anderson, the well-known 20th century American author, who had married a woman from Marion, moved to the Virginia mountains and was looking for something to do.

After he sold the paper, Gil stayed on as a typesetter, working first with Sherwood Anderson, then Sherwood's son.  Gil had ink in his veins and typesetting was his trade.
﻿﻿﻿﻿﻿﻿

My great-uncle Joe helped his dad set type and then continued to work at the newspaper in some capacityfor decades, through numerous owners and newspaper name changes. 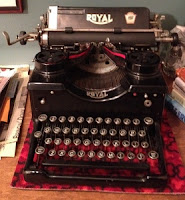 My great-aunt Cleo was one of the older women who served as neighborhood correspondents and turned in copy each week about the social happenings in town. Her typewriter is now in my library.

Working at this newspaper was my first job when I finished high school.  I was the Features Editor of our high school paper, and my mother encouraged me to apply for a job as a summer intern at this "real" newspaper.  It was a small town weekly then, and I covered the meetings of the town council, the county board of supervisors, and the school board unless it was an important meeting, then my editor would go. I also got to write feature articles, which were my favorites. However, I didn't like the tragedies and begged off covering a drowning at the near-by lake. I probably wasn't really a good reporter back then, lacking a certain aggressiveness in going after a story, but all my life I have loved newspapers, reporters and writing. 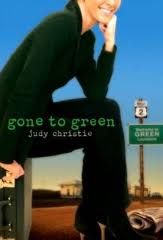 I didn't want to read local author and former newspaperwoman Judy Christie's Green series books for a long time.  I knew they were set in a fictitious town of Green in northwest Louisiana and were part of the religious fiction genre, but that's all I knew about them.  Despite these doubts, I downloaded Gone to Green on my Kindle just for the "cultural capital."  Locally everyone was talking about the books, yet I knew next to nothing about them.  Well, Christie had me at the milieu.  Once I discovered the book was about a young woman, Lois Barker, who inherited a small town newspaper, I was hooked.  So far I've only read the first book in the series but I plan to continue.  I can't help myself--I have ink in my veins!
Posted by Teresa at 11:25 PM 4 comments:

A Year of Reading from my Library

My goal this year is to only read from my extensive, existing personal library.  I'm running out of room for books and might be persuaded to pass along a book to a friend once I've read it.  I can't seem to part easily with a book I haven't read because as soon as I do, I'll want to read it. 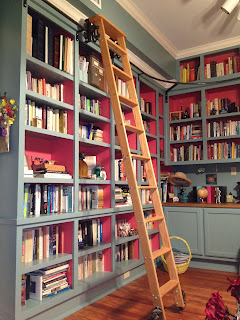 I do have several exceptions to this edict of only reading books I already own--it doesn't count if someone gives or loans me a book, or if someone gives me gift card for a new book, or if I download a book on my Kindle.  After all, the Kindle was a gift and it would be rude not to use it.

Today's book review falls in the latter category--I downloaded it on my Kindle, but it is an "old" book, published originally in 2009.  Number 3 in the humorous mystery series by Lisa Lutz, an Edgar Award nominated author, this book has all the characteristics of a Spellman mystery--no bodies pile up in this series but misunderstandings and subterfuge abound.

Isabel "Izzy" Spellman has taken a hiatus from the family's detective agency, but it hasn't ended her investigating because the Spellman family can't stop investigating each other.  Brother David is acting weird, Sister Rae is undeniably a weird teenager, but has suddenly turned studious while she relentlessly tries to get back in the good graces of her best friend, police inspector, Henry Stone.  Izzie is being blackmailed, she has lost her job as a bartender and is working freelance on a case while she decides whether to rejoin the family's investigation agency.  And so this crazy mystery goes lurching along to its predictable ending, but the fun isn't in the mystery but the characters and their strange, but somehow believable, behavior.

A little bit of the Spellman family keeps me satisfied for quite awhile, plus the numerous footnotes used by the author are difficult to deal with on the Kindle.  Tomorrow another Kindle read brings me closer to home.
Posted by Teresa at 10:01 PM No comments:

As I have mentioned in an earlier post, my paying job is Supervisor of an Early Head Start program in Caddo Parish.  I  was hired to write the federal grant that landed the program for our area, and I have stayed on board to supervise the program.  It has been a challenging and rewarding experience. Our center serves low income children, 2 months to 3 years of age.   We have our share of adventures up on the Cooper Road, the location of our main center and my primary office.

Today is a rainy day in NW Louisiana, but it assumed "Rain Day" significance when our CEO called the Early Head Start Center and told us to have the parents pick up the children early because of the threatening weather all around us.  The students and staff had already been outside this morning to experience the rain before the weather got stormy, then they spent time seated in the hall during nap time because of the tornado threat, while the administrative staff looked at weather reports on TV, computers and listened to NOAA radio. 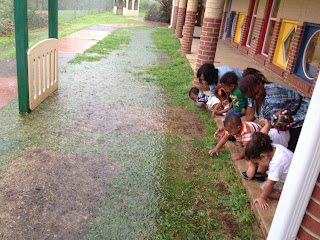 It took a couple hours but all parents were finally contacted and showed up to pick up their little ones. 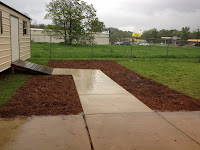 I love my Early Head Start office on MLK Drive.  Photo on left shows the area that one of our dads plowed in front of our storage building where we will plant our Early Head Start garden.  Last year we had a bumper crop of okra and cherry tomatoes.  This year we are expanding our selection.  We also have birds that build nests on the ledge outside one of our back doors every spring.  This year's nest is made of mud. 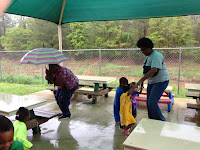 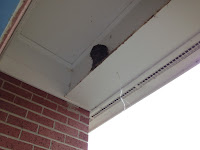 Bird's nest on the left and dancin' under the awning in the rain on the right.
Posted by Teresa at 4:25 PM 1 comment:

Ricky asked me if I had mentioned on my blog how clever he is.  I had to admit I had not, but reminded him this was only my second posting and I am still creating this blog even as I try to post fascinating tidbits about our life in Highland.  So this post is dedicated to Ricky.  The belief among Ricky's friends and family (and I'm quoting), "Ricky can do anything."  They tell the story about Ricky fixing a friend's car by blowing on it.  I don't know if Ricky can do anything, but he is very handy.  Ricky used to be a farrier (he shoed or, if you prefer, shod horses), and he still enjoys doing a bit of blacksmithing and welding.  Thus, our trip to East Texas a few weeks ago to pick up a load of used horseshoes.  He's been working, so I'm going to include a few photos of his recent creations. 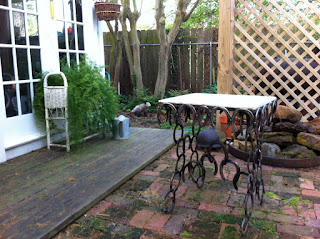 This is the second of the horseshoe tables Ricky has made for the patio.  Our friend Karmann gave him a slab of marble for this one, and he was off and running.  Note the possum that wanted to get in the photo (in the background to left of table).  I told you we have possums that think they are cats. 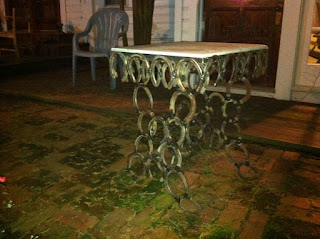 View of table without the possum.  Ricky actually modified the table a little bit since this photo but you get the idea.
Pictured below are examples of the forged plant hangers that Ricky makes with the horseshoes.  They are bent into unique shapes and are ready to hold our hanging planters.  In the background of  one of the photos is an example of one of Ricky's wind chimes (red cylinder), made from something he repurposed--I'm just not sure what it was. 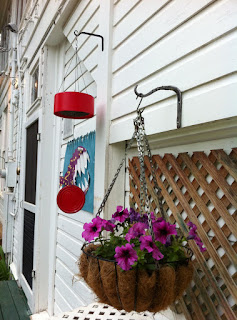 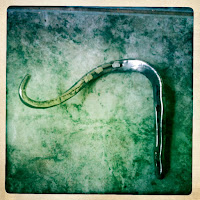 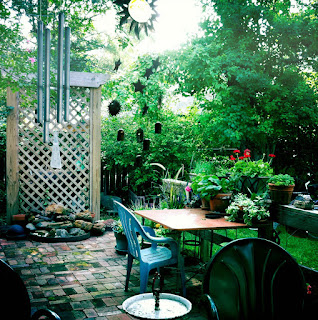 I leave you with one last view of our patio in the summer--a patio Ricky built using old bricks that were left in this yard when we bought the house.  The fountain Ricky created from rocks from the old flower garden borders is featured against the trellis that he constructed.  Note the orange table top that Ricky made and affixed to some table legs that a friend dragged out of the trash and gave them to us.  An affinity for trash to treasures is definitely a characteristic of a true Highland resident, and all of these quirky items make our backyard quintessentially Highland and demonstrate that Ricky is either very clever or very quirky or perhaps both.
Posted by Teresa at 9:01 PM 3 comments:

Our Life in Highland 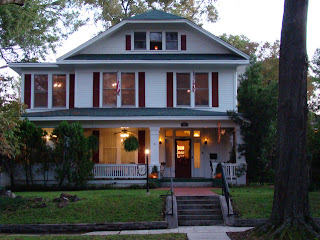 Before you get to the cottage hidden in our backyard, you see our big white house, a modified four-square architecturally-speaking, but looking a bit like a farmhouse set down in the city in some great Monopoly game played decades ago.

The backyard porch and patio leading to the cottage--this is the perfect place for sitting outside, eating lunch and relaxing.  And that is exactly what my husband, Ricky, and I did today.  Creating this blog was frying my brain and I needed to detox with nature.  This is one of my favorite spots to relax and escape the world for a little while.  I love to sit on the porch in the mornings, drink coffee and write, before I go to work.  I am joined by numerous cats and the occasional possum.

In addition to supervising the Early Head Start program here in Shreveport, the city in Northwest Louisiana where I live, I am President of the Highland Restoration Association, the organization working to preserve and revitilize our historic neighborhood.  I also laughingly claim to operate the neighborhood Feral Feline Feeding Station because we feed many stray cats and take as many as we can to our local low cost spay and neuter clinic to be fixed. 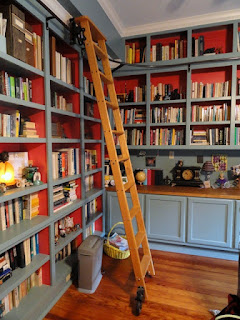 I love my library!