I can’t believe it’s been so long since I’ve written on my blog.  Approach—avoidance.  I’ve missed writing my blog, just as fiercely as I’ve resisted writing it. I’ve been busy, but not every minute of the day.

I’m involved in a variety of community projects at the moment. I currently chair the nominating committee for the board of directors of my neighborhood association, the Highland Restoration Association (HRA). The neighborhood organization is an all-volunteer, non-profit organization that has existed for decades, dedicated to preserving our historic central city neighborhood, home to two nationally recognized historic districts.

We recruited youthful, energetic board members for the neighborhood association next year, but HRA has no paid staff and much work to be done. We host events, monitor property standards and zoning issues affecting our neighborhood, have monthly clean-ups, complete physical improvement projects and beautification of gateway sites, and partner with other groups to address neighborhood challenges.

We need all the help we can garner. We must deal with complacent and bureaucratic city officials, property owners and state laws that allow “demolition by neglect”, renters who don’t care, and a youthful criminal element with easy availability to firearms. I’m making it sound like Gotham. My passion for preservation makes me hyperbolic at times. I also serve on the board of the Louisiana Trust for Historic Preservation and assist in the local revolving fund effort where we are trying to save homes from demolition by acquiring them through donation or by paying affordable price. We stabilize the homes to prevent further decay, fix up the exterior, draw up historic easements, and sell the property to save it and return it to the tax rolls. The money earned is returned to the revolving fund for future restorations.

Even with the significant challenges, most days I feel blessed to live in this vibrant and diverse neighborhood. A friend once described our neighborhood residents as hippies and hipsters.

We have awesome neighbors on our street. One young dad makes homemade bread, and we’ve been the fortunate recipient of warm, straight-from-the-oven loaves, as well as homemade cakes. We care for one neighbor’s cats while they are out-of-town, and another neighbor watches our house and gets the newspaper and mail when we are gone for a few days. When I had my knee replacement surgery, women I only knew from the HRA Facebook page showed up with meals. I’m humbled by their kindness.

There is one thing you can say about Highlanders—we like to have a good time!
For art lovers, we have Highland Open Studio Tour Sunday, or HOSTS, the quarterly studio tour where local artists offer artwork for sale in homes and studios throughout the neighborhood. HOSTS is a rolling party, a progressive dinner, and an arts and crafts fair meshed into a single event.

Ricky and I hosted our second Highland Open Studio Tour Sundays (HOSTS) on December 9. Local artists set up in our home (and half dozen other sites) to sell their original art. My husband Ricky offered blacksmithing demonstrations and displayed some of his wares to sell.  All the tour locations serve free food to shoppers and guests. Our fare was red beans and rice—a Louisiana Monday meal served on Sunday! 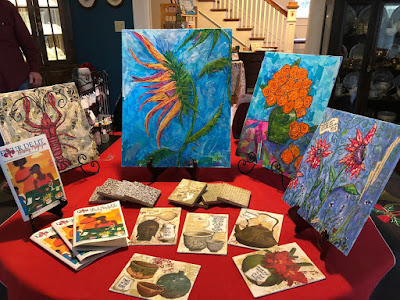 One special item that was for sale at HOSTS was the third issue of the literary magazine for Northwest Louisiana, Fleur de Lit, that my friend Melissa founded with some help from the women in my writing group. Usually in Louisiana, everything focuses on Baton Rouge and New Orleans. It's like the state of Louisiana stops at I-10, but this literary journal focuses on the northwest part of the state. I've been fortunate to have poems and articles published in all three journals. Copies of the journal can be ordered at www.melissainkdesigns.bigcartel.com.


During our previous HOSTS event, our friends in the Fiddlin’ Tim Trio played in the cottage.  This time our friend Joanie Nerrittig played her guitar and sang, then she went with Ricky and me to Fairfield Studios where the Fiddlin' Tim Trio and friends were showcased in the Shreveport House Concert series. A creative circle of sorts.

Fairfield Studios is a small recording studio that features singer-songwriters and musicians who perform concerts in an intimate-sized, listening room. The space accommodates about 100 people. Local musicians perform the opening act, and during intermission, everyone can enjoy a buffet meal before the primary talent takes the stage. The main acts are singer-songwriters who are touring small venues, or who have Shreveport musical connections. The music may be folk, country, pop, or an eclectic mix, but always interesting.

Highland is a neighborhood that supports live music. Music lovers flock to the neighborhood’s free admission, two-stage Highland Jazz and Blues Festival held each fall in the near-by park. Attendees bring chairs or blankets and spread over the hill in front of the picnic pavilion or around the gazebo at the other end of the park to listen to the bands. Scattered throughout the park are food, drink, and crafts vendors.

Highland’s biggest weekend is the Sunday afternoon before Mardi Gras, or Fat Tuesday, when the Krewe of Highland parade snakes through our neighborhood. The marching krewe, Blanc et Noir, and a brass band lead off the parade.  Then, cries of “Throw me something, mister” echo through the streets as elaborate professionally-constructed Mardi Gras floats, modest homemade floats, vintage cars, marching high school bands, performers on stilts, and people on bicycles pass by for a couple of hours.

Krewes are social groups, usually non-profit organizations that put on parades and balls during Carnival season (Mardi Gras in Louisiana) before Lent. In Shreveport, the krewes also perform community service.

I’ve been selected to serve as Mardi Gras Queen of the Krewe of Highland for 2019. It’s an honor and a responsibility to represent the krewe and the neighborhood. Other royals include a king, a captain and co-captain, and a royal court of dukes and duchesses. The theme for our Krewe of Highland Mardi Gras 2019 is Under the Big Top (coronation) and the Greatest Show on Earth (ball).  Highland’s coronation and ball feature costumes, but not the elaborate outfits associated with Mardi Gras in New Orleans.

The Krewe of Highland held the coronation this year at an outdoor venue, which was the wintering grounds for the Mighty Haag circus around the turn of the 20th century. Ghosts of the Mighty Haag Circus may have wandered among us that night. Not even a rainstorm at the beginning of the event, where revelers had to huddle under tents, marred the festivities. 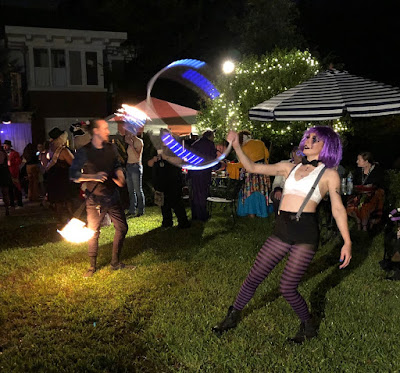 Besides the unveiling of the royal court, we had a buffet of hors d’oeuvres, a deejay, a silent auction, and performers entertaining the guests.  Our circus entertainment included a fire-eater, young women gyrating with hula-hoops of fire, a man who lay on a bed of nails while a party goer broke a cinder block on his abdomen, a photo station where you could have your picture taken with a mermaid and merman, plus games of chance.  My alter ego for the coronation was Queenie, a circus attraction that’s part-leopard/part-woman.

The  krewes often host teas for the queens, so far I've attended two that have allowed me to get to know some of the other queens and members of their krewes. (You may have to be from a Mardi Gras part of the country to understand all this.)

I like to have fun, I like art and music, old houses, my old house with its hidden cottage, healthy neighborhoods, reading and writing and travel and spending time with my family and so many things. It's hard to fit it all in.  I'm grateful for the year that was 2018, and I look forward to more adventures in 2019.