The Heroine Who Cultivates Poison Ivy


Sparkle Hayter wrote 5 mysteries in the 1990's/2000 featuring TV executive Robin Hudson, whose alarm and personal protection system for her New York apartment features poison ivy growing in a planter on her window sills, cans filled with rocks strung in strategic places around her apartment and an old Enfield rifle.   It is the planter of poison ivy, which provides the fragile segue from my posts about the plants in our yard back to mystery reading.


At the beginning of this book, Robin's apartment burns up, forcing her to kick the planter of poison ivy out of the way so she and her cat, Louise Bryant, can flee down the fire escape and join the other residents of her building in their pajamas standing on the sidewalk.  Escaping with just her laptop, a few mementos and her purse, Robin finds herself bunking at the famous Chelsea Hotel in the apartment of a friend who is conveniently out of the country.  However, Robin soon gets an unwanted roommate, a young woman from an unnamed Easter Bloc country fleeing an arranged marriage, and bedlam ensues.  Murder, mistaken identities, performance artists, inept thugs, a looted piece of art, revenge of a woman scorned, a religious zealot, a convent of nuns who bake and sell expensive cakes--all mesh together somehow in this wild and crazy mystery from Hayter.

The setting of New York city and, in this particular mystery, the Chelsea Hotel, are elevated to character status in the book and make me want to see New York City and the Chelsea Hotel for myself--preferably with someone as wild and crazy as Robin or Sparkle herself.

The plot is relatively unimportant in a Hayter mystery--the Robin Hudson books are so outrageous and entertaining .  Up late one night to finish the book, I was laughing so hard during one scene that I was afraid I would wake up my husband on the other side of the house.  Now I'm sad that there no more Robin Hudson books to read.

Hayter was born in British Columbia but has lived all over the world.  She worked at CNN and then reported on the Afghan civil war, but subsequently decided to give up reporting in war zones.  She returned to the states, wrote novels and did stand-up comedy.  She has lived in Tokyo, Paris and most recently has become fascinated with Bollywood and India, where she is currently working on a project.

More Scenes of Spring in Louisiana

I continue to putter about the garden and our plants continue to bloom, so I sharing a few more pics that show off the beauty of our Louisiana spring in the Historic Highland neighborhood.

Still Puttering about the Garden

Since my stated goals for my current semi-retired state include spending more time outside in the "garden" (loosely defined as the outdoor space around my house) and learning more about photography, I decided to combine the two intentions today.  I continued with the Zen of pulling weeds and puttering, repotting a few plants I had rooted over the winter.  Time will tell whether they survive.

Then after Ricky took some photos of flowers in our yard and of course his pictures are dang near perfect, I decided to get out the camera that Ricky gave me (his old one!) and take photos.  Ricky says that is the only way to learn to take good pictures is to take a lot of them.  It is such a gorgeous day and spring in Louisiana is truly beautiful, especially before the pollen tints everything yellow, that I figured it would be hard to take awful photographs! (And besides I have Adobe Photoshop, so I can cheat a little.)

The following photos give you a peek at our "garden" spaces and flowers: 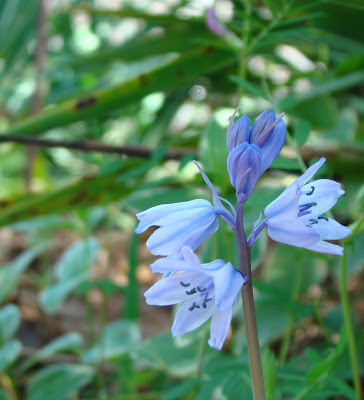 The last flower on today's tour is a tiny one blooming beside the drive-way--it could be a weed or wildflower.  I really don't know much about flowers or plants, if you haven't figured that out by now.  I grow them, inherited a lovely yard when we bought the house, but often don't know what I have--I guess that's another goal to add to my retirement list!﻿﻿﻿﻿
Posted by Teresa at 5:02 PM 1 comment:

This is my first post since Christmas, and I'm not sure why I haven't written.  I don't live in a climate where one wishes to hibernate during winter months, emerging only with the return of spring.  There were a few bone chilling, damp days that only those who live in the Deep South can appreciate.  We know it isn't that cold by the thermometer reading, but the cold permeates and settles into your bones.  My Dearborn heater in the library quite satisfactorily keeps me toasty warm and there I sat and read.
﻿
Mardi Gras here in our Highland neighborhood was a grand success, and our annual Open House saw more than 100 friends and relatives pass through on parade day, the Sunday before Fat Tuesday, enjoying traditional Louisiana cuisine of shrimp and grits, two different gumbos, red beans and rice, king cake and much, much more.  Ricky then headed to New Orleans for Mardi Gras, while I headed to the sofa to rest!
﻿

I retired from my Early Head Start (EHS) position at the end of February, which necessitated packing up two offices and moving furniture and many boxes to our cottage in back.  Leaving was bittersweet as I was the "Mother" of the Early Head Start program here, having written the grant and worked with my wonderful staff to establish the program, then supervised it for over 10 years.  The staff gave me a delightful going away party at a local restaurant where it was like Christmas and birthday combined.  Some of my original EHS teachers returned for the party, and we laughed so much that our waiter was glad when we called it a night.

Life rolls on in cycles.  After leaving Early Head Start (my first job the summer after college graduation over 40 years ago was teaching Head Start in my hometown), I returned to LSU Health Sciences Center, Allied Health, part-time as an Associate Clinical Professor where I worked for about 15 years before the EHS experience.

So, the boxes are slowly moving from the cottage to my new office space at LSU Health.   I thought I might find academia too quiet after the excitement of working in early childhood centers filled with noisy young children, but I'm thoroughly enjoying my new position.  The job is "special projects," and, thus, still evolving but I love it.

My goals in my increased leisure time include: work more in the "garden" (I love the way our French friend refers to her outdoor space broadly as the garden, so I think I will, too!); write more; learn more about photography; travel; exercise more; try new recipes so we won't be tempted to eat out as often; and to read every book in my library!  I've started on the last goal with the books shown below. 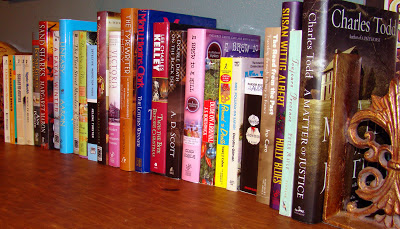