We have a new puppy--he just showed up here at our house, aka Rescue Central, or the Wilkinson Street Feral Feline Feeding Station.  In the past it has been cats that hang out on either the front porch or guest cottage porch in the back.  We feed them and get them "fixed" and hope they keep on moving.

Therefore, a couple weeks ago I was surprised to see a small, black puppy sitting in our driveway.  He barked at me and ran under our house when I approached, but eventually came out and wanted to eat.

We posted photos of the puppy in the neighborhood but soon found out he belonged to a homeless guy who really didn't want the dog.  Ricky paid the guy a few dollars to make puppy officially ours and named him Treble.  Ricky says when you say it fast, it sounds like "Trouble" and, of course, he is.  The puppy had mange, worms, fleas and no puppy shots.  Several vet trips later, Treble is right at home and we have too much time and money invested to give him away.

Treble fits right in with the "cat pack."  He chases them and they wop him up the side of the head when they tire of his antics.  He and the smallest cat, Lips, wrestle like puppies rolling all over the yard.

Here is a later photo of Treble in the laundry room/sleeping porch area where he stays.  He must be supervised when he's outside because he can walk right through our wrought iron fence. 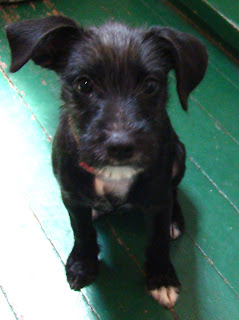 Treble is a very busy little fellow.  I co-hosted a bridal shower for the daughter of my best friend today.  While I was gone, the puppy worked hard on his own project on the sleeping porch!  Luckily this settee was nothing we cared about. 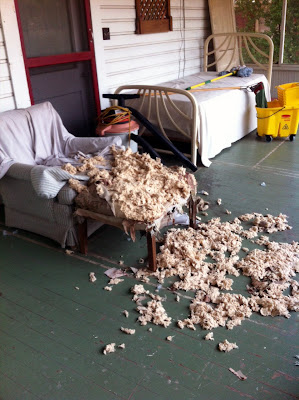 A Horrible, Good Book: The Yonahlossee Riding Camp for Girls

“This book is good, but horrible,” said my friend as she handed me The Yonahlossee Riding Camp for Girls to read.  I've read the book now and I know what my friend meant.


Fifteen-year-old Thea Atwell has spent her life protected from the rest of the world.  The Atwell family’s world is isolated and insulated in rural Florida in 1930, yet they are happy.  Thea lives with her parents and twin brother, Sam, with occasional visits from her uncle, aunt and their son, Georgie.  These are the only people she interacts with.  She rides and jumps her pony for hours each day.  The twins are home-schooled by their physician father and get to spend most of their days outside exploring the acres surrounding their home.  Yet disaster approaches this paradise.
The book begins as Thea is sent away from her family to the Yonahlossee Riding Camp for Girls, a riding school for rich southern girls in Blowing Rock, North Carolina, because of a horrible incident in which she plays a central role.  Thea is desperately homesick for her bucolic life in Florida, but she resigns herself to her situation because of the guilt she feels for what happened in her family.

Thea eventually grows to love the school.  Here she is able to continue her equestrian passion of riding and jumping, as well as her other passions.   As Thea deals with people and happenings at the camp, she begins to develop some insight into herself, the events of the past and what she needs in life.
Thea is both victim and “Lolita.”  She was like watching a train wreck unfold.  At the end of the book, Thea describes her teen-age self, “I wanted everything….I was a girl, I learned, who got what she wanted, but not without sadness, not without cutting a swath of destruction so wide it consumed my family.  And almost me.  I almost fell into it, with them.  I almost lost myself.”
The book moves back and forth in time as the story of what happened in Florida slowly unfolds.  DiSclafani doesn’t sugarcoat the events.  Her descriptions are real, I felt like a voyeur at times.  I wanted someone to step in and stop the downward spiral, but as in life, events lead to other events and each has a consequence— sometimes with tragic results.
I don’t know that The Yonahlossee Riding Camp for Girls is a likable book, but it is an engrossing one.
Posted by Teresa at 10:31 PM 1 comment: