I am wanting to update this blog, and haven't done it yet.  In the meantime, I decided to continue to post until I can complete my intention of a new look, new focus, maybe a whole new blog.

This morning I joined about a dozen other Master Gardeners in a spectacular formal garden in our neighborhood to present the owner with a plaque acknowledging his participation in the upcoming Les Tour des Jardins.
﻿﻿﻿


Since I last posted, my husband and I went several rounds with our Metropolitan Planning Commission regarding our Little Free Library (LFL).  The MPC ordered our book exchange closed because one person complained, saying the book swap box was a commercial entity.  The crazy part is the MPC initially agreed and ordered the LFL shut down, contending it was a library and, thus, a commercial enterprise.  The MPC later changed our offense to having an unauthorized accessory feature in our front yard.
﻿


﻿
After a Facebook campaign that went viral, intense local media attention, and coast-to-coast coverage of the issue, the city council quickly passed a resolution to allow book swap boxes to remain.  (You can "Google" Edgerton, Shreveport and Little Free Library to see the extensive media coverage this issue initially received.)  Now, the city council is planning to pass an ordinance to regulate book exchanges, requiring a building permit and a 5' setback from all property lines, among other regulations. 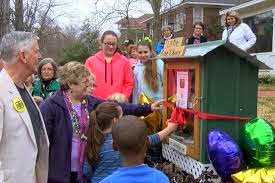 We hope our officially registered Little Free Library will be grandfathered in, because it does not meet the requirement of a 5' setback from the sidewalk, a problematic requirement in our older, hilly neighborhood.  Ours sits on a hill next to a retaining wall that we built to prevent our soil from washing down and covering the public sidewalk in front of our house.


﻿
Instead of everyone being able to access our Little Free Library from the sidewalk as they now do, the proposed ordinance would require that everyone climb a hill or go up steps in order to use it.  Our neighbor who was terminally ill and used our LFL to borrow western novels in the last weeks of his life would not have been able to  get to the LFL under the proposed ordinance.  The city council will be excluding or making it difficult for a whole group of persons with mobility issues to access book exchanges in Shreveport if they pass the ordinance as the MPC has drafted it.  So, I guess we will have another skirmish on our hands if nothing changes between now and next week when the city council meets.