Separating Children From Their Families, Part 2

Lisa Wingate's compelling work of historic fiction, Before We Were Yours, is based on the true story of the Tennessee Children’s Home Society and Georgia Tann, the director of the Memphis branch of the organization. From 1924 until 1950, Tann and her agents "stole" over 5,000 poor children from their families, or conned parents into signing away their parental rights.  Tann then sold these “orphans” to people who could afford to pay for a child.

I know many of you read Wingate's book when it first appeared in 2017 or have seen the made-for-TV movies based on Tann's actions, but the topic was relevant to me and also seemed timely to current events.
When I read Before We Were Yours, I read it with the knowledge that I, as a former social services worker, had one time tried to take a mother’s children from her because I thought it would be better for the children.  I'm not saying I was wrong or right in my actions, I just remember that it wasn't a decision I made easily. You may read about it here. 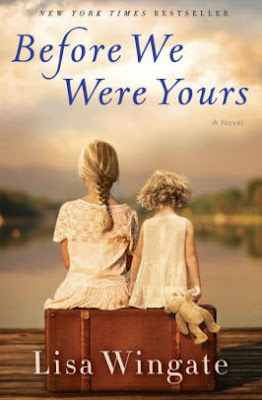 During the Great Depression, an estimated 50,000 people lived nomadic lives on the waterways of the country.  The shanty boat families often camped along the riverbanks when they  weren't moving back and forth on the water. These poor families were one group that Tann and her henchmen preyed upon.

Wingate’s fictional narrative tells the story of one shanty boat family. Rill Foss and her siblings are taken from their river gypsy parents, Briny and Queenie Foss, through trickery and strong arm tactics.  When Queenie, the mother, has trouble delivering twins with the aid of a midwife on their houseboat, Briny rushes Queenie to the hospital in Memphis. The doctor tells Briny and Queenie that the twins died, a common ploy that the Memphis Children’s Home Society uses to obtain newborns for adoption. Hospital personnel then trick Briny and Queenie into signing papers that terminate their parental rights for all their children.

While the Foss children are home alone on the houseboat awaiting the return of their parents,  men board the boat, abduct the children and take them to a boarding house for children in Memphis, which is part of the Tennessee Children’s Home Society. The oldest child Rill tries desperately to watch after her four siblings, Camellia, Fern, Lark and Gabion in the harsh conditions of the boarding house filled with other children. Rill soon discovers that children disappear from this facility; some children are adopted after adoptive parents pay the proprietor of the enterprise, Georgia Tann, a substantial fee, while others just disappear and are presumed dead.

Friends of Briny and Queenie from the river shantytown, Zede and Silas, try to help the children escape, but by then the family has been destroyed. Rill and her sister Fern are fortunate to be placed together, adopted by a wealthy family who loves them, treats them kindly, and provides them with many advantages growing up. Rill resigns herself to being May Weathers, the name given to her by her new family.

The story of the Foss children unfolds in alternating chapters in Wingate’s book. Rill’s voice details the horrifying circumstances she and her siblings face as they are forcibly removed from their riverboat home and taken to the Memphis Children’s Home Society.  The next chapter switches to present day and is the voice of Avery Stafford, a young woman from a prominent political family in Memphis. Avery is searching for answers about her beloved grandmother Judith’s life as Judith Stafford’s memories and words are lost to dementia. Eventually the lives of the women, Avery Stafford, May Weathers, and Judith Stafford, intersect.

Georgia Tann’s contemporaries were either ignorant of her nefarious network or willing to ignore her methods of procurement and treatment of children. At one time, Tann’s contemporaries praised her as the “mother of modern adoption.” Because Tann catered to prominent men and women who desperately wanted children, the stigma of adoption began to disappear.  Actors Joan Crawford, Lana Turner, June Allyson and Dick Powell used her agency to adopt children. Eleanor Roosevelt sought Tann’s advice on issues of adoption and child welfare during the Depression.


In 1945 between 40 and 50 infants in Tann’s boarding homes died of dysentery.  However, Tann and her network were so embedded into the circles of power and control that when the Tennessee legislature passed a law requiring that all boarding houses for children must be licensed, they exempted her establishments.

Many parents whose children were stolen from them tried for years to find their children.  Authorities made this next to impossible. Even after the horrors committed by Georgia Tann were exposed, Tennessee public officials sealed the records of her homes until 1995!

During the years Tann operated her series of boarding houses for “orphans,”  it’s estimated that 500 children died in these institutions. In recent years, Tann has been described as the most prolific serial killer of children in US history.

Wingate consulted multiple sources to confirm and tell the story of the Memphis Children’s Home Society: books, articles, plus the 1950 report to the governor of Tennessee.

Once again, an ugly chapter involving the treatment of poor children is being written in the United States. Along our southern border from April--June 2018, Border Patrols agents and immigration officials separated an estimated 3,000 children from their parents, immigrants from Central America, who are trying to enter the US from Mexico.

According to parents, government immigration agents told the parents that their children were being taken to another space for a shower or bathroom break but in reality, the children were removed to large holding facilities until the Office of Refugee Resettlement (ORR) could take custody of the children. The adults were sent to detention centers without seeing their children. Some immigrants report that they were pressured to sign forms waiving their reunification rights, others were told if they agreed to deportation, they would be reunited with their children more quickly. This was a lie.

When the president of the American Academy of Pediatrics, Colleen Kraft, toured a Texas holding facility for children, she found children in great distress. Kraft wrote after her visit, “Separating children from their parents contradicts everything we stand for as pediatricians – protecting and promoting children’s health. In fact, highly stressful experiences, like family separation, can cause irreparable harm, disrupting a child’s brain architecture and affecting his or her short and long-term health.” Long-term toxic stress bathes the brain in hormones that can permanently alter the  "wiring" of a child's brain.

As of July 29, 711 children had not yet been reunited with their families. The parents of 431 children have already been deported, making the reunification process more difficult. Immigrant advocacy lawyers continue to work on behalf of these children and their families, trying to reunite children with parents or other family members.

I think of the Memphis Society Children’s Society Home when I read of the horrors these immigrant parents have endured.

Wingate dedicates Before We Were Yours, to  “… the hundreds [of children] who vanished and for the thousands who didn’t. May your stories not be forgotten.”

I hope the stories of these immigrant families are not forgotten, because the United States is a better country than these incidents indicate.