I’m writing from the mountains of Virginia. I drove to my hometown to help my sister who recently had surgery. Mountain vistas relax me. I somehow feel more serene once I pass Birmingham and enter the southern foothills of the Appalachian Mountains. My tranquility is an involuntary feeling, like reconnecting with an old friend.
If I’m being logical, I’m not sure I would move back to the Virginia mountains even if the perfect opportunity arose. I love Louisiana. I appreciate the joie de vie of Louisianans. I cherish the diversity of people who live in Louisiana. I love the festivals, the food, the musical heritage, all my friends, and Mardi Gras—and I’ve grown accustomed to warm winters. During the COVID year of 2020, I even learned to embrace the torrid heat of our summers!
Moreover, there is no getting around the fact that winter in Appalachia can be bleak—whole mountain sides with bare stick trees, brown foliage on bushes. The green of the evergreens can’t quite overcome the surrounding drabness. Add in the chill winds and lackluster sun—it’s still dark at 7:00 am in my hometown--and you begin to understand why I welcome snow when I’m here. Snow covers the ground, makes graceful folds of the hills and valleys, and sits on each branch and twig making them photograph ready.
I’ve been visiting my sister for a little over a week, and finally we got snow! A moderate amount, about 4”—enough to cover up all the grass and turn tree limbs into pictures of perfection. I quickly move from window to window taking photographs, but did I go outside to frolic in the snow? The answer is no. Living in the Deep South for over 30 years, I don’t own much snow gear, e.g., warm slacks, sweaters, snow boots. At least that’s my excuse. My caregiver role assisting Beth post-surgery was to follow her around telling her not to do things that the doctor told her to avoid: “Don’t lift that potted plant.” “Don’t reach up in the cabinet to get that down.” “Don’t unload the dishwasher.” “You’re not supposed to do laundry.”
When middle sister Susan arrived, a week after Beth’s surgery, she said, “Beth acts like she’s already well. There’s nothing for me to do.” The three of us pitch in to cook the meals, Susan and I try to make Beth observe social distancing with her friends who bring her food and flowers. Today we three sisters sat and admired the snow from inside Beth’s warm house. When Beth’s husband arrived home from work, we tried to convince him that we had been busy all day. Can your heart belong to multiple geographic locations? Certainly mine does. I will enjoy my visit to my mountain hometown for a few more days, then I head south to my other home. I love the Appalachian Mountains, but Louisiana’s unique ambiance has cast its spell on me and won’t let me go.
Posted by Teresa at 5:40 PM 4 comments:

Snow Day in the South

Guess what?  It snowed in Shreveport last night--great big flakes reflected in the streetlights as it fell!  By morning the snow barely covered the grass, but it was enough to shut down all area schools today.  It’s several years between snowfalls here in the Deep South so we all enjoy it while we can.  Sadly, most of the snow melted by mid-morning today.  A friend posted a photo of her twins out in their yard with a big snowman that they woke up at dawn to build!

About 3:00 am this morning the power went off, and our generator isn’t working properly.  When the repairman came last time, he said he couldn’t fix it because he had to see it while it was malfunctioning.  Ricky called this morning—the guy is on vacation.  Ricky started the generator manually so we could have morning coffee.  It stayed on long enough for that important function, then stopped again.

The electricity is back on after six hours off so it’s all good.  We have gas space heaters scattered throughout the house and cottage so we don’t freeze even when power is off.  We light them during the day in cold weather.  At night, we huddle under covers.  When it’s cold and humid in the south, that chill creeps into the bones, something northerners may not realize if they haven’t experienced it firsthand.

Ricky built another bird feeder, a shelf that he attached to the wooden fence outside the library windows.  We watch the birds and write down the different species we see.  We are having so much fun!  According to the German Center for Integrative Biodiversity Research study, Europeans who see the most bird species in their day-to-day lives are the happiest.  The authors calculated that being around 14 bird species provided as much satisfaction as earning an additional $150 a month.  During the pandemic as people have stayed at home more, birdwatching has become popular.  Since I read the article correlating diversity of bird species and happiness, I’ve been trying to figure out if Ricky and I see 14 species of birds in our daily lives!

Of course, the birds at the feeders in winter differ somewhat from the birds we see in the summer.  The hummingbirds have migrated, and the Mississippi kites, small birds of prey, have disappeared.  In the summer, we regularly observe 5 or 6 kites at a time circling high above our house and the near-by city park.  I did see a hawk flying toward the park the other day.  This time of year, we see and hear ducks in their V-shaped flocks heading toward water somewhere.

Meanwhile, I’m studying the bird book trying to distinguish among all the brown birds at the feeders—are they juveniles of the species, displaying winter pattern feathers, or females?  I give up.

Tufted titmice and juncos love the birdseed, and I recognize them.  We also have multiple cardinals and purple and house finches eating sunflower seeds from the feeders. Blue jays and mockingbirds prefer to hang out in the bushes and trees in the front yard.  Flickers walk up and down the old tallow tree in the back.

Like many people, I decorated with abandon this year for Christmas.  It didn’t matter that very few people saw my decorations.  It brought me joy.  On this snow day in January, reminiscent of a White Christmas, I leave you with a few photographs of my holiday décor from this past Christmas. 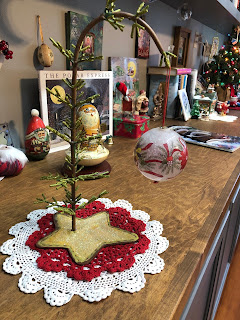 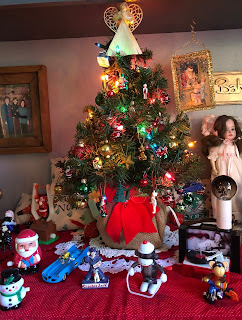 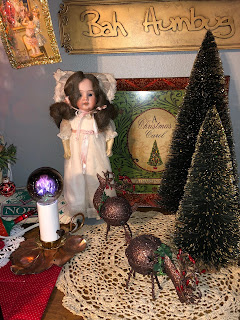 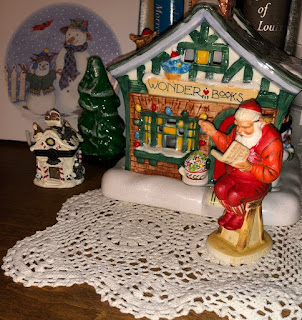 I love Christmas dishes, so here are dishes on display in the kitchen: 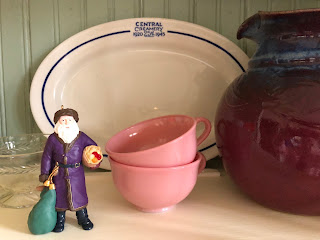 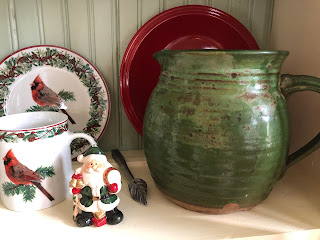 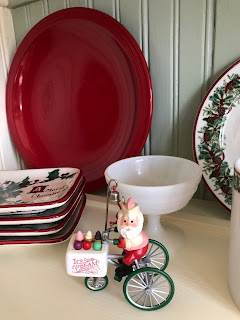 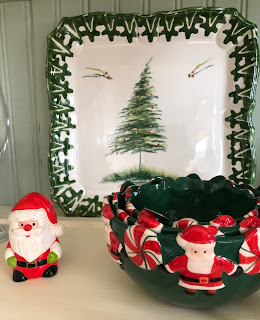 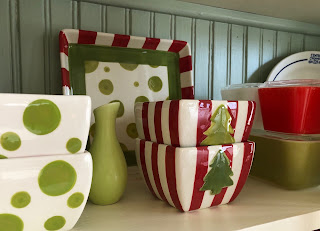