Wandering through winter with Edwin and Nellie Teale 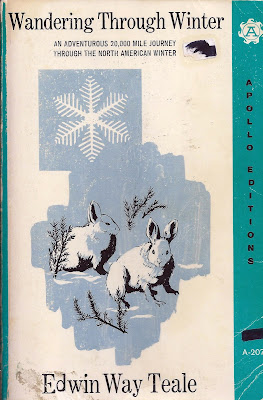 Author Edwin Way Teale won the Pulitzer Prize for General Nonfiction in 1965 with Wandering Through Winter: An Adventurous 20,000 Mile Journey Through the North American Winter.  This book is the last in a four volume natural history series by Teale, each of which describe a trip he and his wife make, crossing the United States as they follow a different season for each book.  Teale made the first trip with his wife Nellie in 1947 as a way to deal with grief over the death of their only child, David, who was killed in World War II.

They begin the series with spring, move to fall on the next trip, follow up with summer, and complete the series with winter.  The Teale’s route is different in each book.  For winter they travel from southwestern most point of the US where California joins Mexico to the northeastern most point of the US, somewhere on the coast north of Caribou, Maine.  Their routes are never direct, but are convoluted as they double back to visit a specific place.  The front of this book has a map that shows each season’s route.

The “adventure” alluded to in the subtitle is very low on the excitement scale. Teale’s writing style initially struck me as stilted and old-fashioned but I got used to it quickly.  Other readers never grow to appreciate it.  One reader described the book as “the most boring book I ever read.”  Teale writes for a more erudite reader than exists today in the general population.

For some reason, I grew to love this book. This isn’t a book about the cold or snow, which one might expect with this title.  The perspective is idiosyncratic.  Teale quotes from Alice in Wonderland when the White Queen said to Alice—“Why, sometimes, I’ve believed as many as six impossible things before breakfast.”  Teale, too, likes to believe and observe the impossible or unusual things as he and his wife wander across the United States.  Fortunately, he then shares them with us, his readers.

Teale spends one of the first nights of the trip in Southern California in the Colorado Desert with a friend and expert on the Chuckwalla Mountain region, Dr. Edmund C. Jaeger who points out that “the desert landscape is monotonous only to the uninformed.” Teale discovers firsthand that on and above the surface of dry land, rapid fluctuations of temperature produce violently shifting air currents.  He and his companions are buffeted by winds gusting to 50 mph that night.  Teale fears he will be swept away, helplessly tucked into his sleeping bag, blown along like a giant tumbleweed.  Teale notices how insects and plants have adapted to the winds.  He watches a small butterfly hook three of its legs around a pebble and then allows the wind to blow it parallel to the ground, a position that offers the least resistance.

Who knew that a bird hibernates for the winter!  Jaeger was the first scientist to observe a hibernating bird, a Nuttal’s Poorwill, and realize what he was seeing.  He banded the hibernating bird and discovered the same bird returned to its small rock crevice for four years running, 1946-1950. 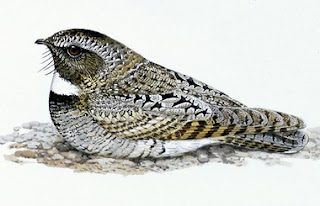 ·        Long-tailed salamanders in the Shenandoah Valley that breed in the basement of a cabin that contains an artesian well.

Each chapter title in the table of contents is followed by a list of topics covered in the chapter.  The book also has a detailed index, both of which helped me to go back and find parts of the book that I found interesting.
Teale was a self-educated naturalist and a staff writer for Popular Science magazine for 13 years, before he quit to pursue his freelance writing career.  Teale died in 1980, while Nellie lived until the age of 92, passing away in 1993.  Their home, Trailwood, is preserved and managed today by the Connecticut Audubon Society.
Posted by Teresa at 8:10 PM 4 comments: