Sometimes you have to grab hold and celebrate the small things in life.  Actually I’m not sure if a perfect weekend is a small thing, but I recently experienced such a weekend, and it was a quintessential Highland weekend.  Of course I realize what is great for me might be less pleasant for you. I accept that, just indulge me for now.

It’s the second weekend in September, and it starts on Friday with books—and not just any books, but tens of thousands of books at the Centenary College Book Bazaar.  I LOVE books, I don’t need any more books, I don’t have room for any more books, I don’t have time to read any more books, but that’s beside the point. When it’s time for the Centenary Book Bazaar, my husband Ricky and I are in line at 4:00 Friday afternoon waiting for the Book Bazaar to open its doors. Ricky always heads upstairs to look through the vinyl, a.k.a. record albums, while I move slowly, shoulder to shoulder with other book lovers, along rows of tables crammed with books. I look for books that call to me, “Buy me, take me home with you, I’m a bargain.”
After a decent interval, I decide I probably have enough books---my rolling backpack is full and the overflow bag I’m carrying is cutting into my shoulder. I check out and less than $50 later, I go home with a couple dozen books.

By then I’d worked up an appetite, so Ricky and I drive a couple blocks out of our neighborhood for Friday night Tex-Mex at Tacomania. We could have gone to El Compadre, another good Tex-Mex restaurant, and stayed closer to home, but we alternate food venues and it was Tacomania’s night.

Saturday morning we are up early for the 2nd Saturday Highland Clean-up (a monthly event) with members of the Highland Restoration Association, Highland Jazz and Blues folks, and Fairfield Neighborhood Association. In truth, very few members of these groups show up but I enjoy the early morning clean-ups. It’s not like I enjoy picking up other people’s trash (a pox on all litterers and their kin), but I feel like I’m making a positive statement—showing appreciation for the beauty of the earth and for our neighborhood by removing what “less evolved” people throw down. This time we’re cleaning the area around Columbia Park in preparation for the Highland Jazz and Blues Festival. I’m often still out picking up trash after the allotted time for the clean-up, because I like to stop and talk to people. It’s a great way to see what’s going on and meet neighbors.

After lunch at Strawn’s, home of the famous strawberry pies, I stop by the Enchanted Garden Gift Shop on Line Avenue, a couple blocks from my house. While I’m there, I run into store proprietor Debbie Cockrell. I always enjoy talking to Deb and the subject of books came up.  (We have a Little Free Library and Deb has some books for me.) Laughing, I tell Deb I’m suffering from a book-related injury. By Saturday afternoon, my lower back is hurting from carrying books around the Book Bazaar the day before, plus carrying full garbage bags during the morning clean-up. Before I know it, I’m in one of those massaging chairs in the store’s back room.  Deb shows me how to adjust the chair’s massage options, and she leaves me there. I might be there yet, but other customers come into the room shopping, so eventually I decide it’s time to pay for my purchases and go home. As I check out, Debbie brings a tin of homemade sweets to the counter and offers me and other customers a sample. A massage chair and homemade cookies—it’s a wonder I didn’t take up residence at the store right then. 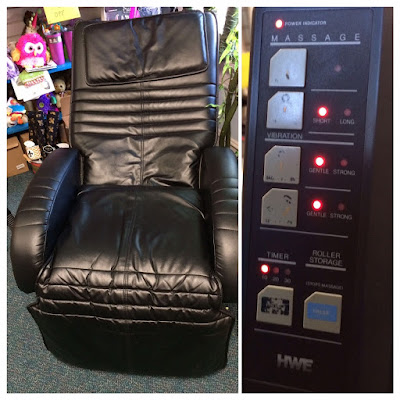 Capping off the weekend on Sunday evening, Ricky and I attend the Shreveport House Concert to hear Shreveport’s own Dirtfoot. The Shreveport House Concerts take place at Fairfield Studios located, not surprisingly, on Fairfield Avenue. We’re big fans of the house concerts with their listening room ambience, perfect for enjoying the singer/songwriters featured each month. And the fact that September’s offering is Dirtfoot, a band with Highland origins, makes it extra special. In my experience, Dirtfoot (accompanied by Pig Stilts) always put on a good show. (See a clip from song below.)

So, my weekend came to a close. It offered a little bit of this, a little of that, but to me, it was a winning combination. I went to bed Sunday night with a smile on my face.
Posted by Teresa at 11:31 AM 2 comments:

Wow! The oldest house in Highland (and probably the oldest house in Shreveport, according to prominent historian, the late Eric Brock) at 530 Kirby Place is getting a much needed face lift. The corner of the lot where this historic house sits abuts the corner of our property in the back. Because of our guest cottage and my husband's workshop, we don’t see much of the neighboring house.

We first heard of this makeover, literally, with the advent of early morning hammering and talking as roofers started re-roofing the house. When we walked out on our upstairs sleeping porch, we could peep at the workers’ progress.

This historic home was a halfway house for men in recovery when we first moved into our home on Wilkinson Street. We never had any trouble with the half-way house residents, but the focus of that owner was never historic detail or aesthetics. When the half-way house closed, a string of residents passed through the property, heard but not seen.

Several years ago, I was told a group of investors brought the house. The Caddo Tax Assessor's website lists the owners as Trinity Utilities LLC, internet research indicates the company was formed in 2010, but I don't know if this LLC still owns it.

Whoever the current owner is, I’d like to hug their neck for trying to save this Highland landmark. This old house is looking quite spiffy these days. The porch is redone, and the house has been painted.

Our explorations indicate that they aren’t quite finished with the skirting of the house, and I don't know what they are doing to the inside, but they already have a realtor’s For Sale sign out front. 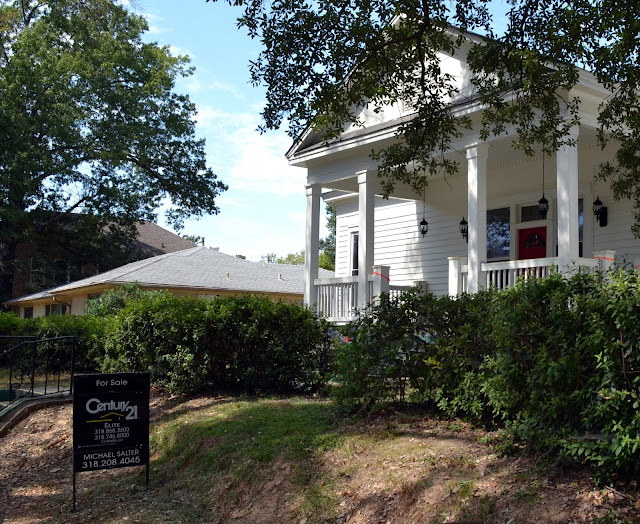 The 530 Kirby Street house was built in 1858 or 1859 at the present location of Creswell Elementary School. In 1923 while the Joseph Agurs family owned the house, the Agurs decided to sell the lot where their home sat on Creswell Avenue to the Caddo Parish School Board. The Agurs family then moved their house “lock, stock and barrel” north a block and around  the corner to its present location. When the Agurs moved the house to Kirby Place, it sat on a large lot. The current lot size is about an acre, most of it in the back. 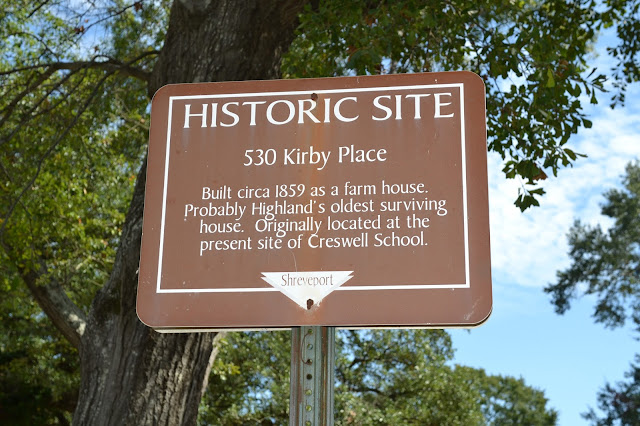 The house has been home to many prominent Shreveporters—among them a steamboat operator, a physician, a pastor, and a former mayor who became a state senator—before the Agurs family acquired it.

The only other homes in Shreveport from the same era as this house are part of the LSUS Pioneer Heritage Center.  These two mid-nineteenth century houses were moved to the campus site from other locations.

I just hope a new buyer of the home is found who appreciates this Highland treasure!

*Historic details about this house are taken  from the Highland Scrapbook compiled by Sue Ball.  Sue Ball credited the late Eric Brock with research about the home’s previous owners.  A complete history of the owners of this house, according to Brock's article, is available upon request, or can be read on the Highland Restoration Association Facebook group page in a discussion thread about this home.