“No one in Virginia will understand this unless they see it”
--quote from my sister, Susan Brooks, during her 2019 Mardi Gras visit

I’m originally from Virginia, and I moved to Louisiana without knowing any details about Mardi Gras.  I’d heard about New Orleans Mardi Gras debauchery on Bourbon Street, and that was my only mental picture.  I’ve lived in Shreveport for over 35 years now, and I’ve learned a bit about Mardi Gras in Northwest Louisiana.

As my reign as Mardi Gras queen of the Krewe of Highland ends on October 18, I’m going to share some of my Mardi Gras experiences. 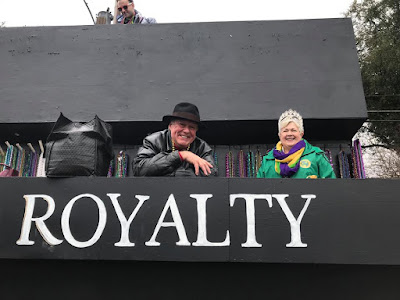 What is a krewe?

For readers who don’t live in Mardi Gras land, in Louisiana a krewe is a group of people, usually a non-profit organization, that stages events or hosts a parade during carnival season.  Carnival, or Mardi Gras, season is pre-Lent and begins on Twelfth Night, January 6.  In the Christian tradition, January 6 marks the Feast of the Epiphany when the Three Wise Men visited the Christ Child.  Mardi Gras culminates on Mardi Gras day, or Fat Tuesday, the day before Ash Wednesday in the Advent calendar.

Sometimes krewe members share common interests or vocations, e.g. in Shreveport, the Krewe of Justinian is comprised of lawyers.  The Krewe of Highland is a neighborhood krewe, associated with the historic neighborhoods of Highland and South Highlands. Our parade rolls on the Sunday afternoon before Fat Tuesday and traverses neighborhood streets.  The parade lasts about two hours from start to finish and passes close to my house, so every year we have a large party and invite all our friends and family who aren’t fortunate enough to live on the parade route.  Last year, the party went on without me because I rode in the parade.

Twelfth Night is the sixth-- the first big event

January 6th is a busy day for Shreveport Mardi Gras royalty.  It begins with a Mardi Gras mass at St. Pius Catholic Church.  At mid-day, there’s a luncheon sponsored by Loblolly, a social service group associated with Mardi Gras.  Food, music, and an auction raise money for Loblolly to continue their work in area schools.  Later, the evening of 12th Night, a big party with all the Mardi Gras krewes kicks off the Mardi Gras social season.  Each krewe decorates their tables, brings food, and socializes with one another or dances to the music of a band.  The krewes take turns organizing this annual event.

“Throw me something, mister!”

Many krewes serve a social purpose, while also performing social service.  During the season, krewe members are frequent guests at schools and senior citizen facilities, where they lead mini-parades complete with Mardi Gras music and inexpensive beads that are thrown or passed out to viewers whose shouts of “Throw Me Something, Mister” are synonymous with Mardi Gras. 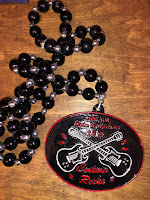 Mardi Gras colors are purple, green, and gold, but beads come in every color of the rainbow, often featuring some sort of cheap medallion.  Each krewe, or individual member of the royal court, also has a specialty bead with a medallion that depicts that year’s theme for the krewe’s coronation and bal.  Some royalty have an individual specialty bead. 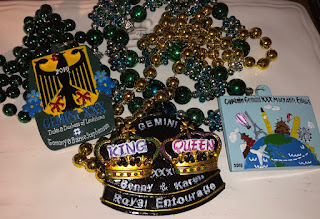 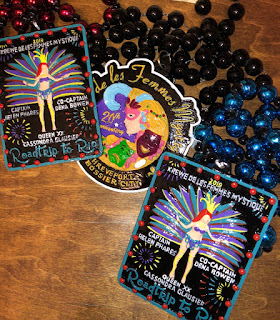 One older woman at a nursing home where the nursing administrator invited our Krewe of Highland to parade through the halls and visit residents in their rooms was not exactly welcoming.  When the other “royals” and I entered the woman’s room, she told us, “Get out, you’re crazy,” and she kept repeating this.  I was the last person to leave and I turned and said to her, “We may be crazy, but it’s in a good way.”  She laughed.

What the heck is a trash jacket and why would you want to wear one?

When krewes attend public events, they wear “trash” jackets.  These are usually tuxedo jackets, embellished with the krewe’s logo embroidered on the back and festooned with inexpensive costume jewelry brooches and sewn-on patches that have meaning for the individual.  Each “trash” jacket is unique and a little bit crazy.

During this year’s Mardi Gras mass, the priest said it made him happy to look out into the congregation at the sea of individuals wearing trash jackets representing all the different krewes.  It’s fair to point out that the Roman Catholic traditions of Mardi Gras practiced in South Louisiana are often lost on the staunch Baptists prevalent in Northwest Louisiana.  I’m not Catholic (nor Baptist), but I found the Mardi Gras mass to be moving and uplifting.  After mass, a family in the church treated everyone to king cake and coffee in the rectory hall.

King cakes are also a Mardi Gras tradition.  They are most often made from sweet yeast dough, rolled out to make a long piece of dough.  A filling is spread on the dough and the dough is rolled up, with the filling inside the elongated piece of dough.  Next, the dough is shaped into a round ring, leaving a hole in the middle.  Then the cake is baked and iced, usually with a simple confectionery sugar icing, and sprinkled with purple, green and yellow sugar.  There are dozens of types of King Cakes, and not all of them are sweet, but common King Cake flavors include apple, cream cheese, praline, chocolate, cinnamon, strawberry and cream, blueberry and cream, and Bavarian cream.

King cakes get their name from the small plastic baby, which is hidden inside each cake.  The baby represents the Christ child.  The person who finds the baby in the king cake is responsible for bringing the king cake next Mardi Gras.  These small plastic babies are definitely a choking hazard, so the uninitiated must be warned about the babies.  Some bakeries place the baby on top, leaving it up to the buyer whether to place the baby inside the cake.

What’s in a name?

In the Krewe of Highland, you get to choose your own name.  I’m Queen of the Wild Things.  My court includes: King Dennis Beckman as King of Fantasy; Captain Sydni Smith is Keeper of Magical Things & Beautiful Beings, and our Co-Captain Michele Marcotte is Mystic Madam of Merriment.  We have a Duke of Pandemonium and a Duchess of Persuasion; a Duke of Division and his Duchess of Enchantment; and a Duchess of the Freak Show and a Duke of Hospitality.  And the list goes on.

You can’t have royalty without a coronation

Every krewe has an annual coronation during which their king, queen, and royal court are announced.  These are usually themed parties held on a weekend night, and the attire ranges from Mardi Gras casual--wear Mardi Gras colors and trash jackets unless it’s 100 degrees outside.  This is when you can bring those light-up shoes and rhinestone shirts out of the closet.  Other coronations may suggest cocktail or formal attire.  I now own five long formals, two pair of piazza pants, and two cocktail dresses—not to mention the costumes required by the Krewe of Highland!  You can see some of the gowns of the queens below: 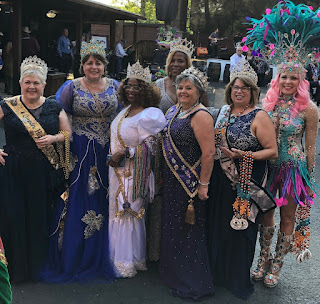 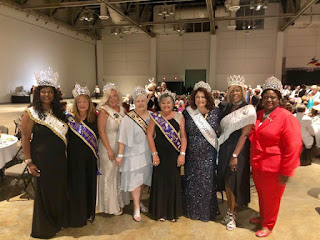 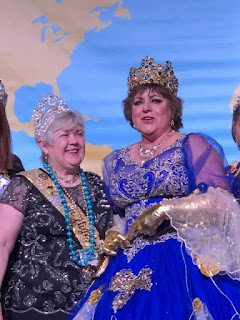 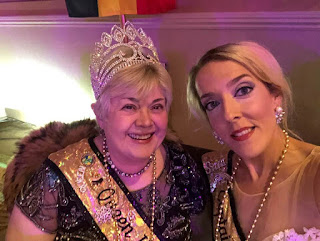 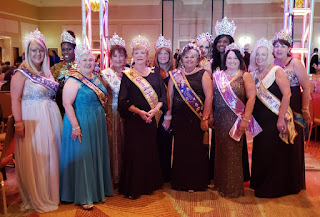 The Krewe of Highland coronations and bals are always costumed events that match the theme.  Our 2018 coronation theme was “Under the Big Top: Amazing Highland Oddities & Attractions.”  To see more about the Krewe of Highland coronation and events happening about this same time last year, click here and scroll toward the end of the post.  When you see several pictures of a woman wearing more leopard print than seems possible, you’ve found it.

In order to enjoy Mardi Gras, you can't take yourself too seriously.  If it's not fun, don't do it! 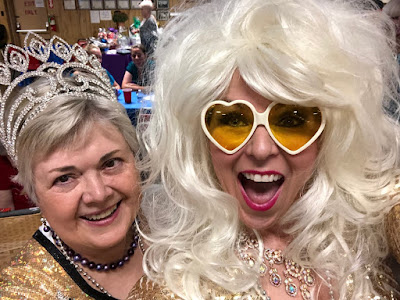 Stay tuned for more retrospective posts about my reign as Queen XXIV, Krewe of Highland, and the upcoming coronation of the next queen and events marking the 25-year anniversary of our neighborhood krewe.