April is Poetry Month, and one of the women in my writing group was talking about the public library promoting book spine poetry this month as a fun activity.  I have a decent-sized library so I decided to see what I could do with books from my shelves.

Without spending a great amount of time on the activity, I entertained myself creating these poems.  A side benefit was the necessity to dig through my library and discover books I had forgotten. 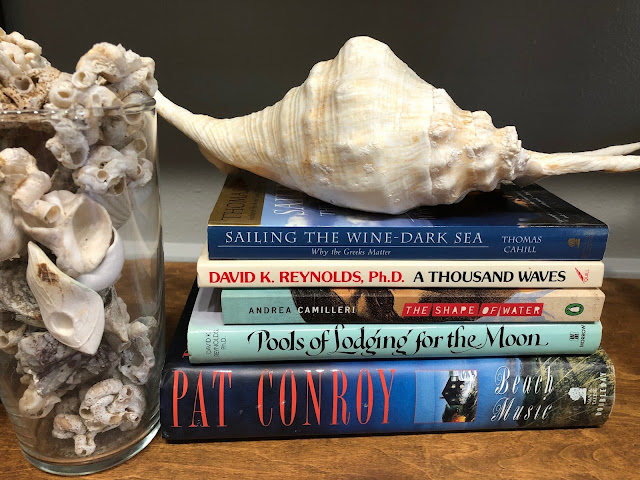 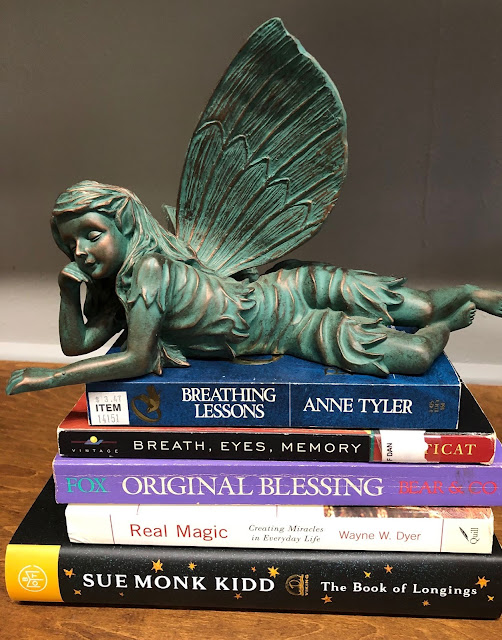 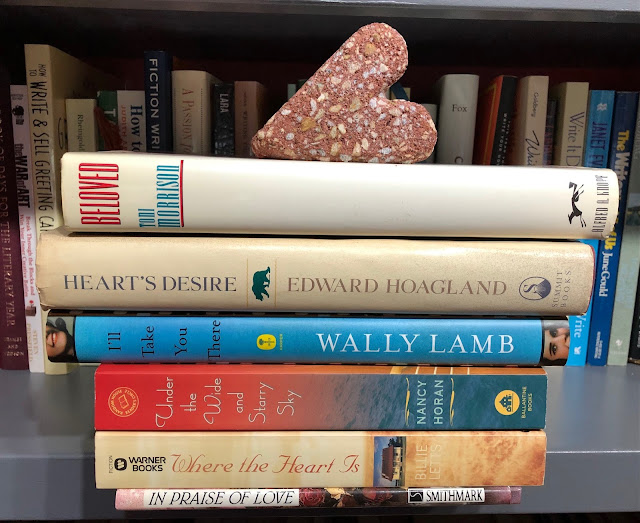 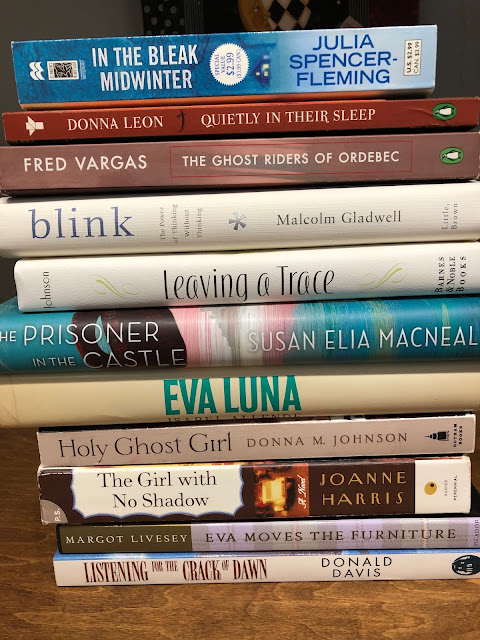 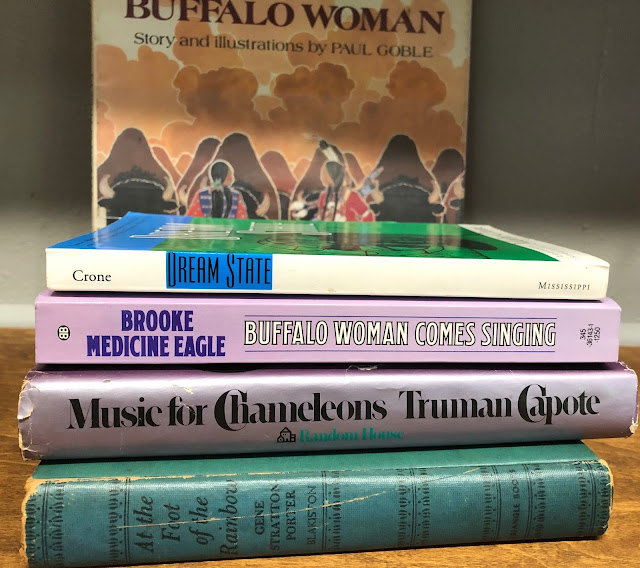 Have you tried book spine poetry, or is it too silly for you?  It's kind of addicting, looking for interconnections between titles.  I have a picture or a story in my mind for each of these.  Perhaps it's just word play, but fun nonetheless.

In other Highland Cottage news, most of our plants survived our Deep South February "snowmageddon" and cold temperatures that I wrote about in my last post.  Actually plants may have had an easier time dealing with the unprecedented events of the cold spell than people did.

Below are a few photos from our front yard today.  We appreciate spring beauty more than ever this year.

Thanks for the stopping to visit my Highland Cottage.  It's spring in southern tornado alley, so we are watching storms heading our way tonight....April showers!

February and March 2021 Happenings: Snowmageddon and the Great Pyrenees

It has been a couple of months since I’ve written a blog post, and I always must write a catch-up post, as if everyone were on the edge of their seats wondering, “What has Teresa been doing since she last wrote?”  My Facebook friends already know, but maybe some of you do not.

The end of February brought snow and cold to Shreveport, which almost shut our city down.  We didn’t have a snow day; we had a snow week.  It’s hard to say how much snow we got—about six inches in all—interspersed with freezing rain and sleet over the course of several days, and the temperatures didn’t climb above freezing.  There were no snowplows.  Roads became treacherous.  People were urged to stay home.  Employees couldn’t get to work.  One Brookshires grocery store operated all day with four employees.  Hospital employees slept over to insure someone would be there to care for the patients, including many with COVID.

Shreveport’s water system failed, unable to get water to most of the city’s neighborhoods. Volunteers began addressing the mounting crises while city, state, or federal entities struggled to respond.  Oil field tanker trucks hauled water to area hospitals to fill their boilers so the hospitals would have heat.  A local bottled water company, Music Mountain, donated potable water to hospitals and other essential facilities.  Our city council woman arranged for the bottled water company to donate water that first responders distributed to the elderly.  Volunteer groups raised money and began distributing water to high need individuals.  People melted snow for water to flush toilets.

The frigid temperatures, which one night was five degrees above zero, added to the misery.  Shreveport's older homes are built with pier and beam construction, which meant that pipes froze in many older homes despite efforts to insulate them.  Once the water system failed, no one could leave faucets dripping, so this added to the number of frozen pipes.  When the weather finally warmed up and the city got water back into all the neighborhoods, citizens discovered burst pipes everywhere.

Brookshires Grocery sent an 18-wheeler to Shreveport filled with pallets of water, which our neighborhood group helped distribute in the store parking lot.  One Shreveport brewery, Great Raft Brewing Company, let individuals fill up containers with clean water that they would ordinarily be using to make beer.  We picked up water at both locations, and Ricky bought lots of water at near-by Music Mountain Bottling Plant, which we shared with others.  Once our neighbors’ water pipes were repaired, they let us fill up buckets of water from their outside faucet to use for flushing, but the city remained under a boil order for days, so we drank and cooked with bottled water.

Once the weather drama was behind us, Ricky and I continued to be involved in our Highland neighborhood, a national historic district in Shreveport.  Our neighborhood needs some love and not just when the pipes break.  Highland is suffering from blight and neglect from property owners and often city officials. The large houses in Highland were subdivided into small, inexpensive apartments in the past, and many renters of these poorly maintained apartments are low-income and transient, contributing to the piles of furniture and rubble that often line our sidewalks.  Fortunately, Highland is also home to young investors who are trying to save the historic housing stock and restore the neighborhood.

In the last couple months, I’ve worked with our neighborhood association on various projects including zoning issues involving historic preservation, plus I continue my daily litter abatement efforts, i.e., picking up trash daily when we walk our dog.

Speaking of dogs, somehow, I got enmeshed in the plight of our neighbors’ two Great Pyrenees dogs, Coco and Grayson, who broke out of their fenced compound multiple times a day.  They loved to roam at night, but they would also take early morning walkabouts.  Everyone in the neighborhood began to recognize them.  Some residents would walk the huge dogs back to their yard, but the fence couldn’t hold them.  One sweet family kept the Great Pyrenees inside their house for the entire day, along with 5 children and their own pets until the dog owners could claim them.  Photos showed the Great Pyrenees looking relaxed laying in the middle of the living room floor, or one even sprawled on a spare bed at one point.  One local veterinarian let Coco and Grayson spend the weekend at her clinic when they followed a man and his dog inside the vet office one Friday.

Because my husband and I are retired, I was immediately aware when the dogs escaped, and I began to feel responsible for keeping Coco and Grayson safe until their owners could figure out a solution.

Finally, our neighbors decided that Coco and Grayson needed more space to roam and jobs to do.  After all, Great Pyrenees were bred to herd sheep in Spain.  I worked for hours trying to find them the perfect new home.  We were eventually able to rehome them to a ranch in East Texas.  The new owner even drove her horse trailer to Shreveport to transport them safely back to Texas.

These dogs were like two 100-pound toddlers when you tried to get them to do something they didn’t want to do.  Their last escape was in the hour before the woman from Texas was coming to get them.  My husband and I drove around our neighborhood, while I looked on Facebook to see where people had reported seeing them.  Finally, we found them following a man who was walking down the sidewalk pulling a suitcase with two Great Pyrenees following behind him.  We had leashes with us, so Ricky walked them blocks across the neighborhood to our house, while I called our neighbor to say we had found them, then called the woman in Texas to say we had them in custody and to come on to pick them up.

In my next blog post, I'm going to share my efforts at book spine poetry in honor of National Poetry Month.