The First Book Review of 2017: The Memory of Running

My goal each year is to average reading at least a book a week over the course of twelve months. Last year I only wrote down 44 books, but I didn't log a couple Youth Adult novels that I read before placing them in the Little Free Library (LFL).

So far this year I’ve completed four books, almost finished two more, and I’m about a fourth of the way through the massive John Adams, by David McCullough.

Our LFL continues to tempt me with titles, such as this book, my first review of 2017. 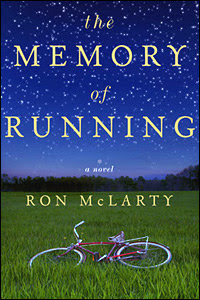 Character actor and playwright Ron McLarty's first novel, The Memory of Running, is about love, loss, and redemption—a modern day Hero’s Quest.  While McLarty wrote this book years ago, but I’m just now reading it, having discovered it in our Little Free Library.

Smithson “Smithy” Ide is an overweight, alcoholic, but dutiful son and brother. He is blindsided when his parents are in a horrific automobile accident. His only sibling, the beautiful Bethany, suffered from debilitating mental illness her entire life and disappeared years before. The family never stopped loving or searching for Bethany, and Smithy is determined to bring her home.

One evening Smithy hops on his beloved, childhood Raleigh bicycle and starts pedaling. He initially has no plan. He’s drunk as usual and what seemed like a good idea at the time eventually becomes something greater. After a few days on the road, Smithy thinks to call his family’s next-door-neighbor, Norma, to tell her he is making a trip by bicycle across the country. He asks her to notify his employer. Years before, the younger Norma was the pesky kid who followed Smithy around and loved hanging out with the Ide family. After Norma was hit by a car and paralyzed, Smithy rarely saw her anymore except through the window of her home.

Norma tells Smithy she has been frantic since he disappeared, and the police are searching for him. Smithy assures her he is fine, and she makes him promise to keep calling her so she will know he is alive.  Soon their phone calls become a lifeline while he pedals across the country. It's Norma who tells Smithy that he is on an important quest.

Smithy alternately is the most unlucky man on earth, or the luckiest one, as adventures and mishaps follow him.  He somehow survives relatively unscathed.  This novel is both outrageous and heartwarming.  By the end of his journey, Smithy is looking more like a hero than a fool.

When McLarty wrote this book, he couldn’t find a publisher.  Since McLarty was also a voice actor, he published it himself as a book on tape.  Author Stephen King heard it and described it in Entertainment Today as “the best book you can’t read.” He helped McLarty connect with Viking Press, and The Memory of Running  was published to critical acclaim. In 2014 Melissa McCarthy and Ben Falcone acquired the rights to The Memory of Running for a possible movie.