Ivy Beasley is a cantankerous, older woman who has relocated to a retirement home to be near her only relative, her younger cousin Deirdre.  Ivy Beasley might be recognized by some readers as previously inhabiting the village of Round Ringford as a character in author Ann Purser’s non-mystery Round Ringford series.  I’ve not read the Round Ringford books so this mystery series is my introduction to her.  I love this line drawing of Ivy but don’t know who to attribute it to. 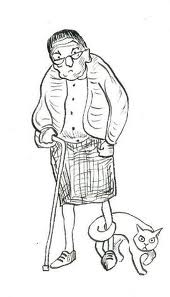 Ivy is unhappy and bored living with a bunch of old people in the retirement home, but she isn’t the type of person who makes friends easily because of her prickly and sometimes sanctimonious demeanor.  Soon another newcomer to town befriends her after church one day.  Augustus Halfhide is a tall, thin secretive man who seems to be keeping a very low profile in town.  When Gus and Ivy get together after church one day, they decide to establish an inquiry agency.  (After all, in my experience the gray-haired network is one of the most efficient research groups in a community!)
Deirdre joins the group, too, since they need her for transportation and as a financial backer for this new enterprise.  Deirdre is bored, too, if she would admit it.  Soon another member of the retirement home joins the agency and Enquire Within is born.  They soon have their first case when Gus’ elderly neighbor is found murdered in her cottage next to Gus’.  I think you either enjoy this cozy series and appreciate the unlikely group of protagonists, with their over the top quirkiness and grouchy moods, or you hate the series.
The characterization drives the novels because the mystery unfolds slowly and some readers find the pace to be too slow and indeed boring.  A few Kindle reviewers were especially vituperous in  their comments as I noted when I read the second and third book in the series as Kindle downloads.  I went ahead and read all three of the books in the series because I enjoyed the idea of elders being successful investigators.  Ann Purser is not Agatha Christie and Ivy is no Miss Marple but the village life and unusual characters kept me interested.


The books in this series are as follows:
The Hangman's Row Enquiry
Berkley Prime Crime, 2010
The Measby Murder Enquiry
Berkley Prime Crime, 2011
Read in Kindle download
The Wild Wood Enquiry
Berkley Prime Crime, 2012
Read in Kindle download
About the Author, Ann Purser:
(Author biography taken from Goodreads)
Ann Purser lives in the East Midlands, in a small and attractive village which still has a village shop, a garage, pub and church. Here she finds her inspiration for her novels about country life. She has only to do her daily shopping down the High Street to listen to the real life of the village going on around her.  Purser brings a wide range of experiences to her writing.  She was a magazine columnist for 6 years and an art gallery proprietor for 10 years. Working in a village school added more grist to the mill, as does singing in the church choir and membership of the Women’s Guild.   She is mother of a daughter with cerebral palsy and wrote a non-fiction book for parents of children with disabilities.
She obtained an Oxford Degree as an adult and eventually decided to try her hand at writing novels.  Round Ringford became Ann’s village in a series of six novels, each with a separate story, but featuring the same cast of characters with a few newcomers each time. The list of books gives details of each story, and each features an issue common to all villages in our rural countryside.
Because Purser is a big fan of detective fiction, her next series became the Lois Meade Mysteries, each title reflecting a day of the week--Murder on Monday was born, Terror on Tuesday, and Weeping on Wednesday. The rest of the week follows!  The Ivy Beasley series is the most recent one.

Purser sets aside mornings for her writing, and the rest of the day finds her walking the dog, retrieving bantams’ eggs from around the garden, gossiping and taking part in the life of the village.

A Reason to Give Thanks 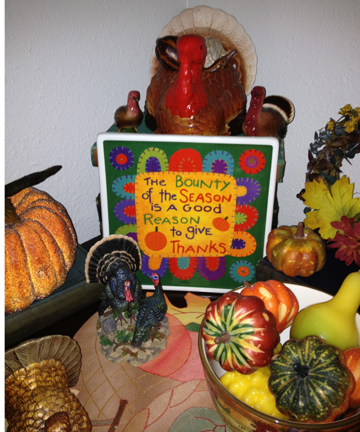 Living life or writing about it?  Reading for pleasure or working on my paying job?  Volunteering in my historic neighborhood or chilling in my library?  Taking care of the hundreds of details for upcoming Thanksgiving dinner and Christmas holidays or trying to enjoy all the fun activities that happen in my part of the world in the fall?

These are some of the quandries of my life right now, and probably many of yours as well.  It's not that I don't want to write in my blog because I love writing my posts--it's just that I am pulled in so many different directions.

I'm thankful to have a rich, full life!  In a minute I'm going to walk over to the park where our annual Highland Jazz and Blues Festival will be taking place--five and a half hours of music on two stages, food and craft vendors--a fun time as only Louisiana can do it.  I'll hear some great music, visit with friends, supervise the festival information and t-shirt booth  volunteers I lined up--and basically have a great day, hopefully forgetting about my "To Do" lists.

I'll get it all done--and what doesn't get done, probably won't have dire consequences.  Soon I'll return to my blogging.  Until then, have a wonderful Thanksgiving week.