My personal reading challenge continues to be reading the books I already own, now amended to include those that find their way to me via our Little Free Library.  It feels like my TBR stack reproduces each night, and I fall behind daily in any effort to keep current on recently published books.  Mostly, I just read what I want to read.


This spring, my light fiction reading list has included the following: 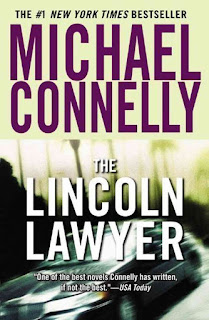 
This book found its way to me from someone else’s Little Free Library.  This Connelly series features Mickey Haller, a defense lawyer, still in love with his ex-wife, a prosecuting attorney in the District Attorney’s office.  The book starts slow but picks up its pace, so it kept me reading late into the night, but I still prefer the police procedurals of LAPD Detective Harry Bosch.  A wealthy real estate agent is accused of the attempted murder of a prostitute.  Mickey is hired to defend him, but is the man innocent, or is Mickey being played?  The book was made into a movie starring Matthew  McConaughey. A theme of Connelly’s seems to be how well justice is served by the systems of law enforcement and the judicial process.  While Haller and Bosch always prevail, justice sometimes doesn’t. 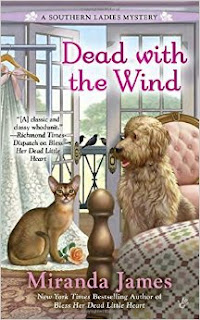 
This series features sisters An’gel and Dickce Ducote, 84 and 80 years of age.  I like to see older protagonists in mysteries, plus this book was set in Louisiana, so I decided to read it.  The plot strains credulity more than once.  The sisters are invited to a family wedding but before it can take place, the bride, a real Bridezilla, is found dead, apparently swept off her balcony during a violent thunder storm?!  For real?  See what I mean?  The most interesting thing about this book is the author, Miranda James, is actually Dean James, a long-time librarian in Texas.  He started out writing non-fiction reference books about mysteries with a collaborator, then got into fiction writing and has since authored 18 whodunits. 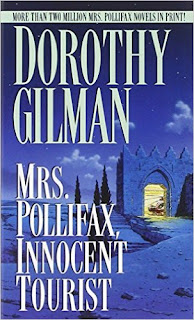 
Such a treat to find a Mrs. Pollifax mystery in my Little Free Library—it just doesn’t happen often enough!  Emily Pollifax, the sixtyish senior citizen who studies judo and occasionally undertakes a clandestine mission for the CIA, is persuaded to go to Jordan with another agent to pose as an innocent tourist.  All they have to do is hang out at a popular tourist spot to obtain a book manuscript being smuggled out of Iraq.  Mrs. Pollifax, as usual, is in the right, or wrong place (depending upon one’s perspective) at the right time and ends up neck deep in multinational intrigue.  Never one to be under-estimated, Emily Pollifax survives with a little help from a Bedouin family.  The last two Mrs. Pollifax mysteries I’ve read have featured themes concerning turmoil in the Middle East.  Gilman is timely even though her novel was written 20 years ago.  Early in the book, Gilman writes that Mrs. Pollifax understands, “America was no longer immune to terrorism and bombs.”   Later a Jordanian character says, ”I think it is our one big danger of a country….That the extreme ones may become powerful and force our women to wear the heavy veils again…all of us to become unfree, when we have become quite free here. Of fear.” 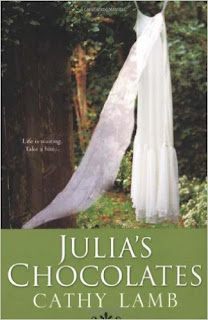 
Someone gave me this chick lit book.  Because it had the word “chocolate” in the title and because it had an intriguing opening line, I put it on a shelf and mentally marked it, “To be decided.”  I wasn’t sure I wanted to read the book, but the first line, “I left my wedding dress hanging in a tree somewhere in North Dakota,” reeled me in.  Julia Bennett is a runaway bride, leaving her wealthy but abusive fiancé at the altar.  She seeks refuge at the home of her aunt, who provided her with the only safe haven she knew as a child, and Julia knows she could count on her aunt.  Her aunt has a cadre of female friends who gather weekly to share, drink, shed inhibitions and empower each other and themselves.  The book is full of female rituals that Aunt Lydia makes up, but each woman is able to overcome her own “devil” because of the foundation gained at Aunt Lydia’s.   Julia is no exception.  In the end, it is the information about the author that interested me as much as the book.  A former fourth grade teacher, Lamb has written over a dozen books of women’s fiction.  She admits that she edits every book twelve times, eight times before she will submit the manuscript to her editor.  I enjoyed reading blog posts on her website as she provides insights into her life and her writing process.


We had a little bit of trouble last month with the Little Free Library.  About midnight on a Friday night, my husband comes flying down the stairs and says, “A group of kids just went by the library, stopped, and did something to it.  I’m not sure what, but I’m going to see.”


The six boys ran down the street when my husband went outside.  They had dumped all the books out on the ground and thrown some further down the sidewalk.  Ricky said, “I’m calling the police to report vandalism.”


Soon two police cars pulled up in front of our house.  The officers looked at the books scattered about and the female officer told my husband, “Another officer has these kids two blocks up the street.”


She told the second officer to tell the officers to detain the youth while she reviewed the video.  She looked at our video of the incident, noted which boys did what, and asked Ricky if we wanted to press charges.  She and Ricky agreed that the boys hadn’t destroyed property, it was simple vandalism, but Ricky told her, “If you could scare them, it would be good.”


The police left.  We went to bed.

The next morning, I was in the house with the front door open and the screen door latched.  I heard someone walking up on the front porch.  It was a woman and her son.  The mother was making the boy come by our house to apologize for his part in the vandalism of the Little Free Library. She was one upset mother!  It seems a group of boys were spending the night together and had sneaked out.


The young man apologized.  I told him he could help me put all the books back in the library.  We talked a little as we worked.  It turns out he loves to read, he said The Count of Monte Cristo is his favorite book. I recommended another book from the LFL, and after examining it, he decided to check it out.


While the boy and I were putting the library back together, a woman and her two kids stopped by. She thanked Ricky and me for finding her toddler's shoe, which the child had kicked off unbeknownst to the mother.  Ricky had found it and put it in the LFL for her to reclaim later.  The mom said she had never seen us outside to thank us personally. Then her grammar school-age son piped up and added, "You have good books in there, I like them."
We were glad the boys were apprehended before they got themselves in a real jam. Little Free Libraries—character and community building!

"Gardening’s real when so much of the world ain’t."

﻿
Some people don’t like having an overabundance of garden produce, but I dream of such a problem—it makes cooking and eating fun and creative experiences.  Years ago when I was teaching school and enrolled as a graduate student at the University of Tennessee, I had part ownership of a large vegetable garden.  We were inundated with spinach and Swiss chard.  I had never even heard of Swiss chard!  This was before the internet so I pored through cookbooks hunting for suitable recipes.  I remember a chard and Parmesan cheese bake, but I’m not sure what else I came up with.  Other people in the house also had cooking responsibilities so they probably fixed “messes” of mixed greens and corn bread, and we all ate well.

I’m originally from a small town located in a wide valley between mountain ridges in Southwest Virginia.  Many people there agree with Loretta Lynn and still plant a garden, and harvest time inevitably brings forth an abundance of squash.  You would be hard pressed to enter a home that didn’t have at least one loaf of zucchini bread in the freezer, waiting for a new neighbor to move in, a friend to fall ill, the birth of a baby, or a bereavement.   Zucchini bread covers it all.

When I had an overabundance of zucchini in grad school, thanks to the largesse of a friend (as it was before I moved into the big garden house), I co-hosted a party that was billed as “Tribute to the Zucchini.”  I made zucchini Provençal, stuffed zucchini, zucchini dipped in a beer batter and fried, and zucchini bread, to name a few of the dishes.

A few years ago, I spearheaded the planting of a small garden at the Early Head Start Center I supervised.  Our successful crops were cherry tomatoes, okra, cucumbers—and zucchini.  When I bought the plants I didn’t realize that most of my staff only ate yellow squash and had never even seen a zucchini.  That meant that I had all the zucchini for myself!  I made a stacked squash casserole; zucchini corn bread, zucchini chocolate chip cookies, oven “fried” zucchini and, of course, loaves of zucchini bread.


Last week a friend gave me a bunch of Meyer lemons so I fixed black-eyed peas, sautéed Swiss chard, roasted red potatoes tossed with lemon juice and olive oil, and lemon corn bread.
As you can see above, currently my garden is a raised bed, actually a horse trough, supported by a frame so it is modest in size.  I hope this experiment produces something edible.  If not, like Blanche Dubois, I’ll be depending on the kindness of strangers, or friends, to share their oversupplies with me.
Posted by Teresa at 3:24 PM 2 comments: