I was looking at a blog post that was linked to a blog hop, From This Side of the Pond, and I'm not even sure what a blog hop is. In my subsequent explorations, I accidentally linked my blog to the Joyce's Hodgepodge blog hop page and its weekly random questions, so now I must answer a series of questions and figure out what the next step is to keep the "hopping" going.

1. What's a word that describes your life? A word you wish described your life?
The word to describe my life is happy, the word I wish would describe my life, productive (and happy).
2. Back in my day we played outside with the neighborhood children because there were dozens of Baby Boomer kids all around.  We entertained ourselves for hours by playing simple games. We played badminton, croquet, a game we called Indian ball with a batter, a pitcher and a couple fielders--you hit the ball, the person who fielded the ball rolled or threw it aiming for the bat which the batter laid on the ground in front of "batting box." If the fielder hit the bat, it was his/her turn to bat and the batter took the field or became the pitcher. We had large games of Kick the Can or Hide and Go Seek when the Oklahoma cousins were visiting in the summer. Our hiding territory stretched over multiple backyards.  We got mayonnaise jars from our moms and hammered holes in the lids, then we spent all evening catching lightning bugs and putting them in our jars. When it was time to go inside, our mother made us release the trapped lightning bugs. When fall arrived, we went Trick or Treating at Halloween with no fears or hesitation as to our safety.  In the winter, we went ice skating on frozen ponds in our neighborhood, we went caroling to the neighbor's houses at Christmas.  Childhood play was more free wheeling then and less circumscribed and facilitated by adults.
3. When it comes to takeout are you more likely to opt for Italian, Mexican, or Chinese food? Does a typical week at your house include takeout?
If we do take-out, it's usually Chinese, occasionally tacos from the small Taqueria on the edge of our neighborhood. We eat out quite a bit, more often at lunch, and mostly dine-in places.
4. Think about the people you most respect. What is it about them that earned your respect?
Their authenticity--they are comfortable with who they are and are kind and caring toward others. I also like intelligence.
5. What's something your friends might see and say is 'so you'?
Probably a book or something vintage.
6.  Insert your own random thought here.

I don't exactly know what I'm doing on this blog hop.  I'm still trying to figure out the rules. That's mainly my thought process at the moment, nothing very deep.

Other random thoughts: I'm thinking about my niece Emily's new website,www.halfnhalf-life.com, where all her blog posts are archived and her new ones will appear.  She writes about her family's life living in the Czech Republic while returning to the United States a couple times a year to visit family and ground herself and the kids in American life and culture. The website is so professional in its appearance, the photography is gorgeous, and I even read some blog posts that I somehow missed when they originally appeared in the Prague Monitor.

I'm wishing I was going to be in Paris with her, her family, and my sister and brother-in-law this week.  They are going to have adventures that I can enjoy vicariously when I talk to my sister or read about them on Emily's website. Our trip last weekend to New Orleans is the closest I'll be to France this year. We stayed at an AirB&B near Magazine Street so we spent a lot of time roaming in that fun and funky part of town. Our B&B was only a block from LaBoulangerie on Magazine Street with its delicious pastries. We bought our breakfast pastries and brought them back to our hidden courtyard to eat. 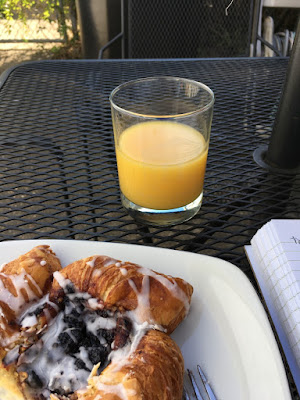 The rain here in the northwestern corner of Louisiana has finally stopped--and it's started up again. We've been getting inundated the last couple of days. Tomorrow I need to unload the five bins of Mardi Gras throws we brought back from our friends' house in NOLA.

The Sixth Grade Self-Contained Class of 1979

Years ago, I taught middle school. My last year teaching in the Knox County, Tennessee, school system I had the most wonderful self-contained sixth grade class. It was an unusual situation. The parents had petitioned for their children to stay together in a self-contained class through sixth grade, instead of changing classes and having a different teacher for each subject. The students had all been together in a self-contained fifth grade class at another school. Surprisingly, my middle school honored the parents' request and chose me to teach the class.  Previously, I had been teaching social studies to 125+ middle school students.

I loved teaching that year, though teaching math and science challenged me. I used the project method of organizing the curriculum whereby we explored a topic from all perspectives, cutting across traditional subject boundaries. If the students came up with a good teaching topic or strategy, we would go with it.

While I did have paperwork to complete, supervisors to please, and only a moderately supportive principal, it was nothing like today.  Generally, as long as my class didn't bother the principal or other classes, we were left alone. I had confidence that as long as the children were focused and involved in their learning, their test scores would take care of themselves.  I stressed reading and writing and engagement. I wanted the students to stick with a task to completion while experiencing the joy of learning.

I've thought of those sixth graders so often, and wondered if they remembered their sixth grade class and teacher. When cleaning my library recently, I found the 1979 school yearbook that I had forgotten existed. Finally I had the students' last names that had faded from my memory in the ensuing decades. I wondered if I could find them on Facebook--those amazing children who would be moving into middle age by now.

First I decided to try to locate the student with whom I spent the most time. This sixth-grade girl lived near the school and would often stay late to help me with various classroom chores. I immediately found her and recognized her from her current photograph, but she had also posted an older photo from her youth that confirmed it.  I couldn't believe my luck. I glanced through her page and located another of the students, a boy, who was so special to me.

I told my sister, who also used to teach middle school, about my search and asked her if she thought it was appropriate if I reached out to these individuals. I didn't want to creep them out. She assured me that any former student would be pleased to hear from me.

I first sent a private Facebook message to the female student. In a couple days I received a response. She said she had been searching for me off and on for years. However, I left Tennessee after teaching them, moved to a Sioux reservation to teach at an Indian college there. I next moved to Louisiana, divorced, and changed my name--all factors making it more difficult to locate me through the internet. She was delighted to hear from me (but not half as happy as I was to find her).

She told me she married the "little red-headed boy" from our class. I remembered him immediately. He was the quintessential American boy--red hair, freckles, hyperactive but just adorable. She said he still appreciated my taking the time to figure how he learned, then I gearing my teaching to his learning style. She said I was his favorite teacher ever! I know I encouraged him in his creative writing. She said he hoped I remembered his story of the red dot in space. I would need a little more prompting on the plot to pull that up from the depths of my aging brain, but I sure remembered him. I even remember where he usually sat in class.

She filled me in on her life, the good times and the not-so-good. Her career path has been as unique and diverse as I would expect from a gifted child. She keeps in touch with several of the other students from the class. I remember them all. Perhaps on one of my drives back to my hometown in Virginia, I can stop in Tennessee and reconnect with the students who remain in the area.

Next I wrote the other student I saw on her Facebook page, the boy who has continued to be her friend over the years. He lives in the DC area with his daughter.  He told me I had touched his life when he was going through a rough period in his childhood. He is now a successful counselor and appears to be a wonderful dad. Again I swelled with pride and pleasure seeing the man he has become.

(I've purposefully not provided names nor many details about the students in this post. I respect their privacy and in no way want to intrude on their lives. And don't ask what I had done to my hair, or more importantly--why? I think a permanent was involved.)

I'm not quite sure what my takeaway is from this experience. I guess I will go with the obvious one. Teaching in the public schools is difficult, even more challenging, if not impossible, today. There is no money in teaching. There is frequently little appreciation for a teacher's efforts, but there's a chance you can make a difference in a child's life that he/she will carry into adulthood. And if you're lucky, you will meet students who will steal into your heart. You will never forget them and know that your life has been the better for knowing them.
Posted by Teresa at 3:58 PM 2 comments: