Once Again, The Once Upon a Time Challenge I was new to blogging when I first participated in the Once Upon a Time Challenge, sponsored by Carl at Stainless Steel Droppings.  Now this reading challenge is in its eighth year, and I think I'll try it again.  From March 21 until June 21, readers who are on The Journey, my proposed level of participation, agree to read one book from four broad categories: Fairy Tale, Folklore, Fantasy and Mythology.  There are many more ambitious options in this challenge, so go to Carl's popular blog to view all the choices, as well as the current participants.
The added challenge for me is I want to read books selected from my own library--books I own but have never read.  This was one of the most enjoyable parts the last time I took the challenge--taking time to read books that have languished on my library shelves, for years in some instances.  It's the "so many books, so little time" excuse.  Plus, the "I have a problem when it comes to buying books" excuse.
I'm still putting together my modest book list, but I plan to start with a book I discovered on my library shelves earlier this evening (before I ever thought about participating in the challenge)--Madeleine L'Engle's An Acceptable Time (fantasy).
Posted by Teresa at 11:37 PM 4 comments:

Email ThisBlogThis!Share to TwitterShare to FacebookShare to Pinterest
Labels: Once Upon a Time challenge, reading 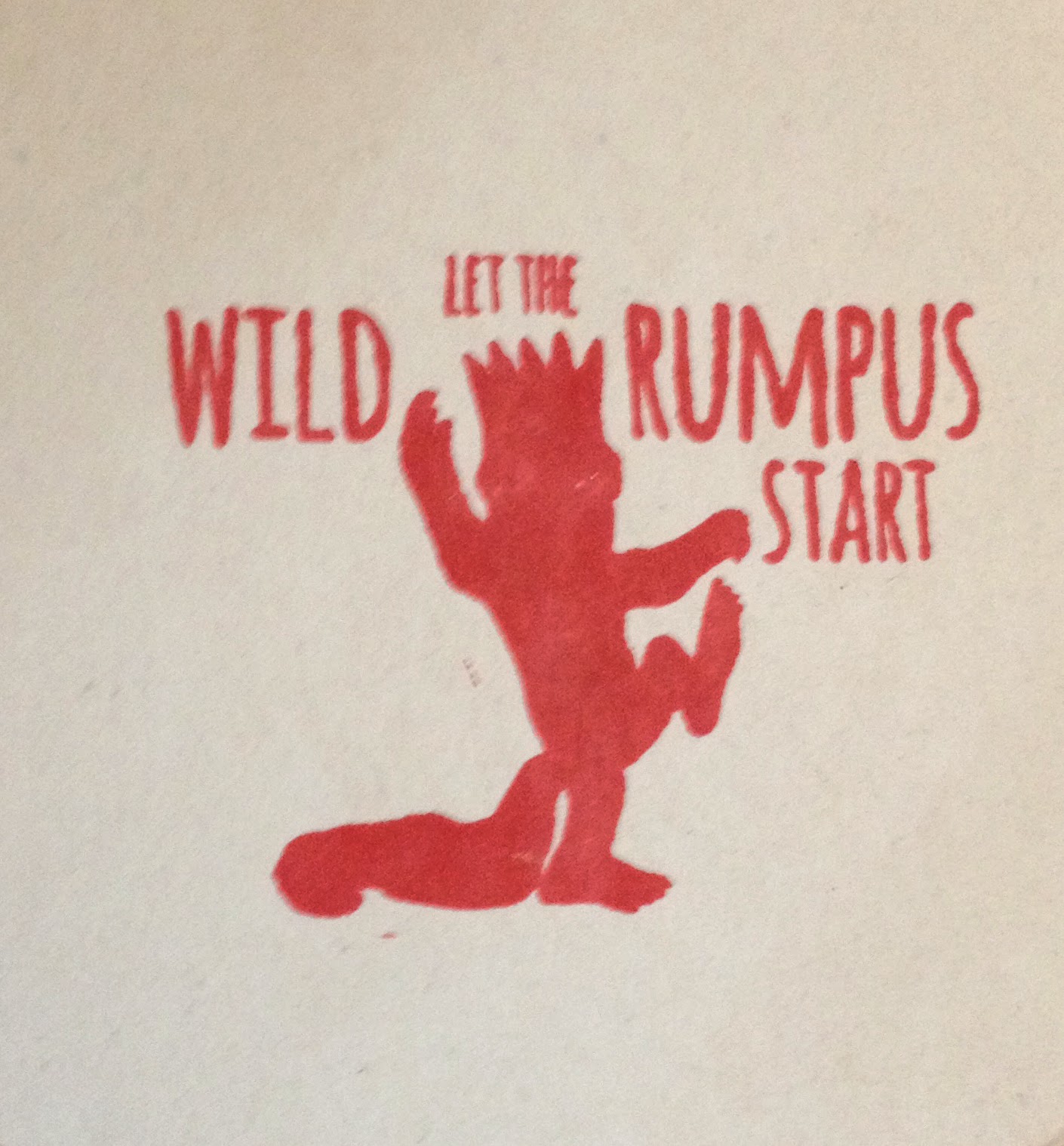 This is a Throwback Post.  The Wild Rumpus of Mardi Gras is over. Things are hectic around here for Mardi Gras, then there’s the extended recovery period afterwards, plus I had my winter bout of bronchitis. So, it's been awhile between posts.  A little catching up....
Ricky and I traveled to New Orleans in February to visit friends and celebrate my birthday and Valentine’s Day.
﻿

We were lucky that it was the weekend of the Krewe du Vieux parade, the satirical and crudely funny parade that pokes fun at everything NOLA—nothing is sacred—no politician or issue is off-limits.  This year's theme was Where the Vile Things Are. 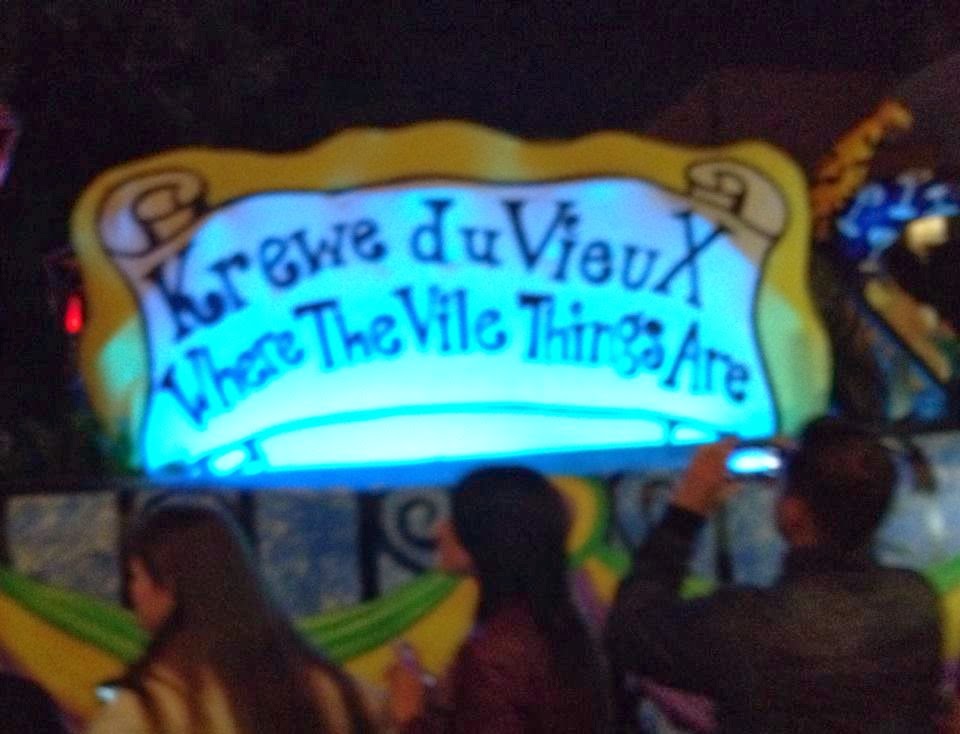 ﻿﻿﻿﻿﻿
Led by Krewe King, Author/Historian/Activist John Barry, the mule-drawn or people-powered floats featured a giant smoking paper mache bong to tout the case for medical marijuana; and a take-off on the popular movie Beasts of the Southern Wild except this was Breasts of the Southern Wild, with, yes, giant boobs.  Continuing the anatomical theme was the spoof of Obama Care, Pajama Care, with giant buttocks and a rectal thermometer in use.  The Disney Landrieu float was a critique of some of Mayor Mitch Landrieu’s recent decisions that have been interpreted as trying to Disneyfy New Orleans; and a personal favorite--a life-size caricature of Louisiana Governor and aspiring presidential candidate Bobby Jindal twerking as he held onto a railing and looked out on parade goers.


It was hard to get good photographs from where we were standing, but Ricky snapped this picture of the Let Me People Go-Cup float from the Krewe of Mishegas, when it stopped in front of us.  The Krewe of Mishegas, the Yiddish word for insanity or craziness, took aim at some efforts to prevent people in the Big Easy from drinking on the streets as long as the beverage is in a go-cup, the current ordinance.
The floats were interspersed with neighborhood brass bands and marchers in outlandish costumes and make-up.  It is one of the most unique of the New Orleans Mardi Gras parades.

Each year our New Orleans friends collect large bins of beads for us to haul back to Shreveport. Thus, we left there with barely enough room for us in our SUV and once we got home in Shreveport, we distributed the beads to folks who were riding floats in our neighborhood parade put on by the Krewe of Highland.  Then, we started in earnest to prepare for our large open house and Mardi Gras party that we have each year during the Highland parade.  The house is decorated for the affair with, what else but--bins of beads! 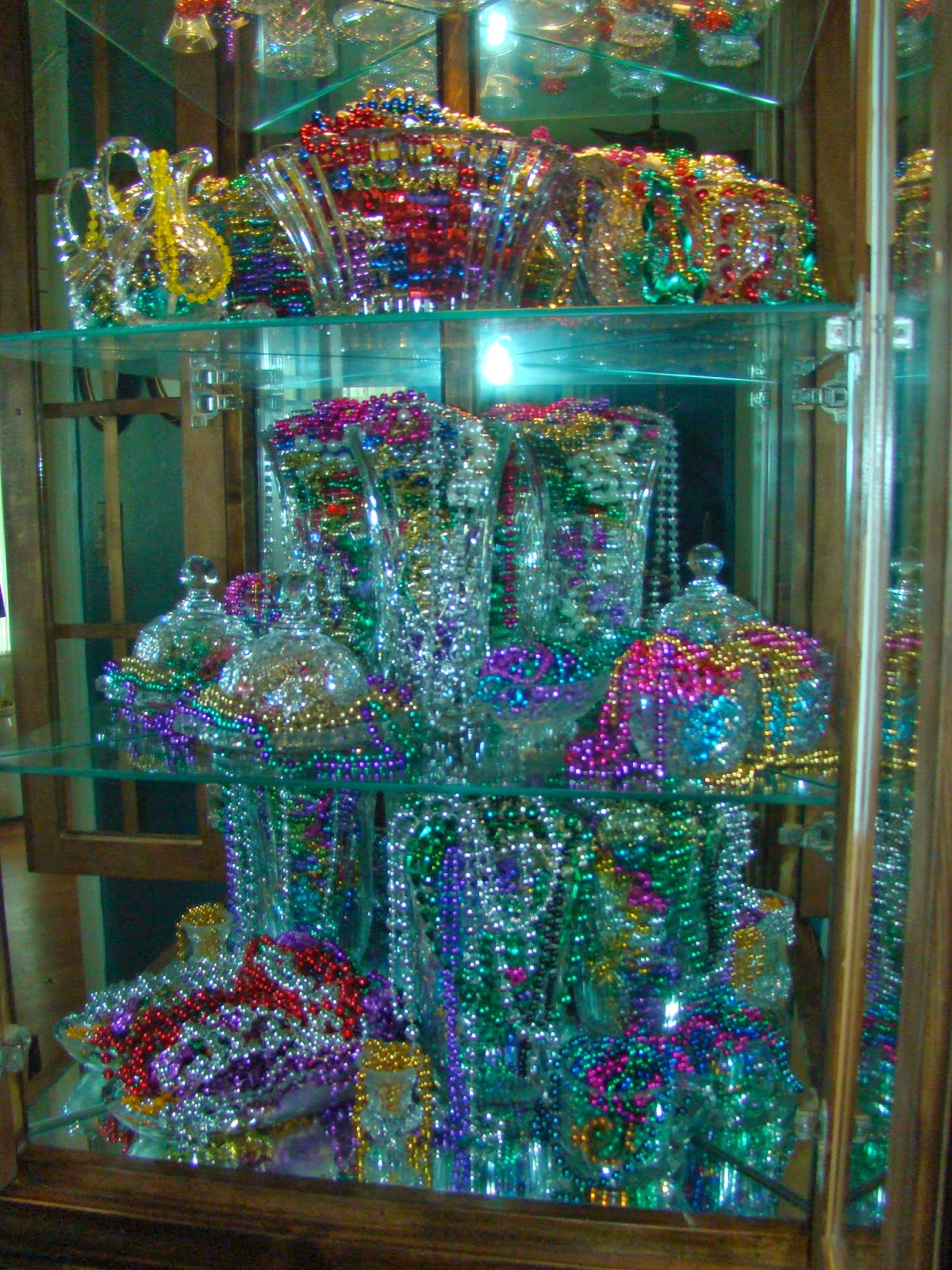 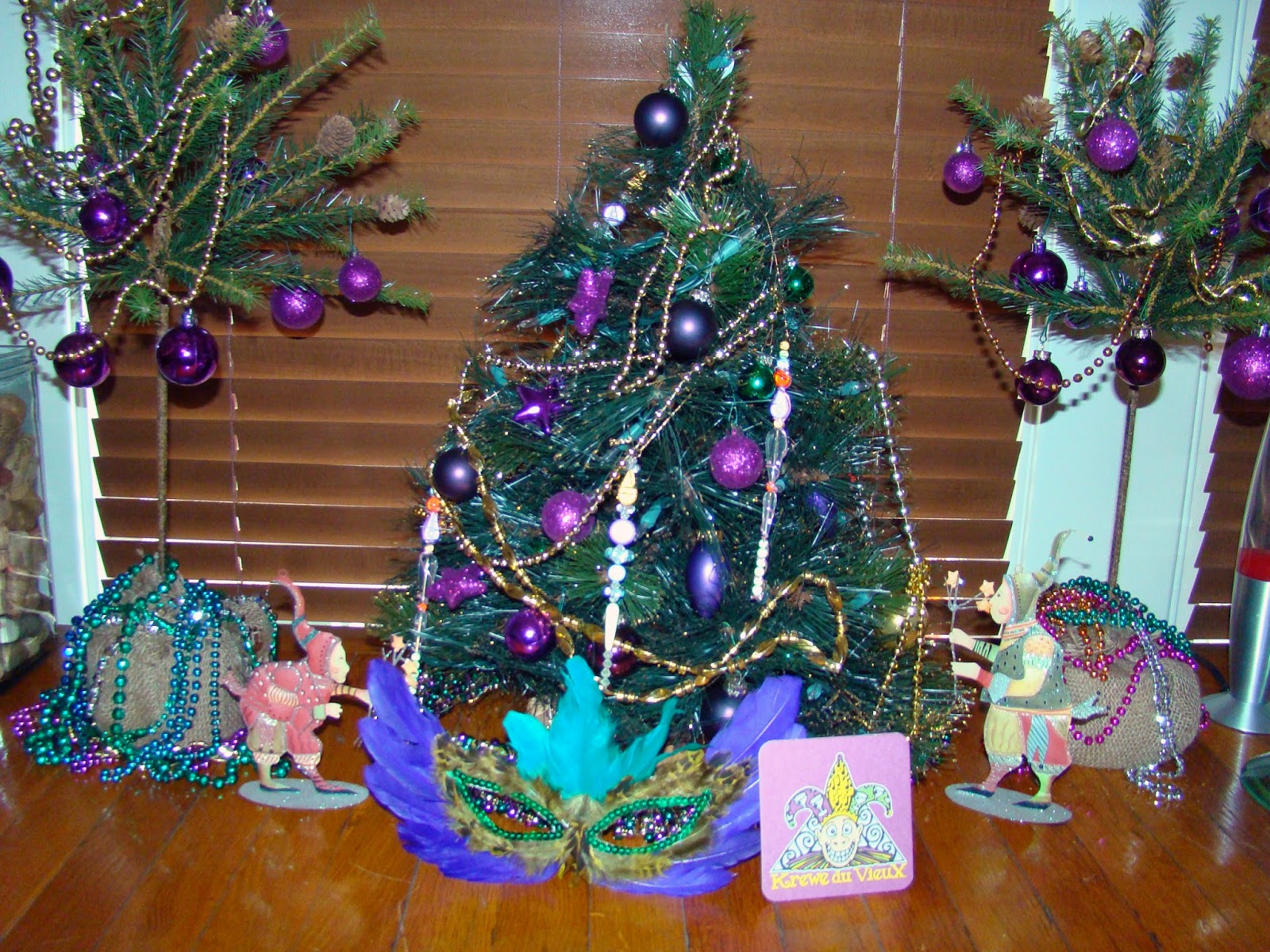 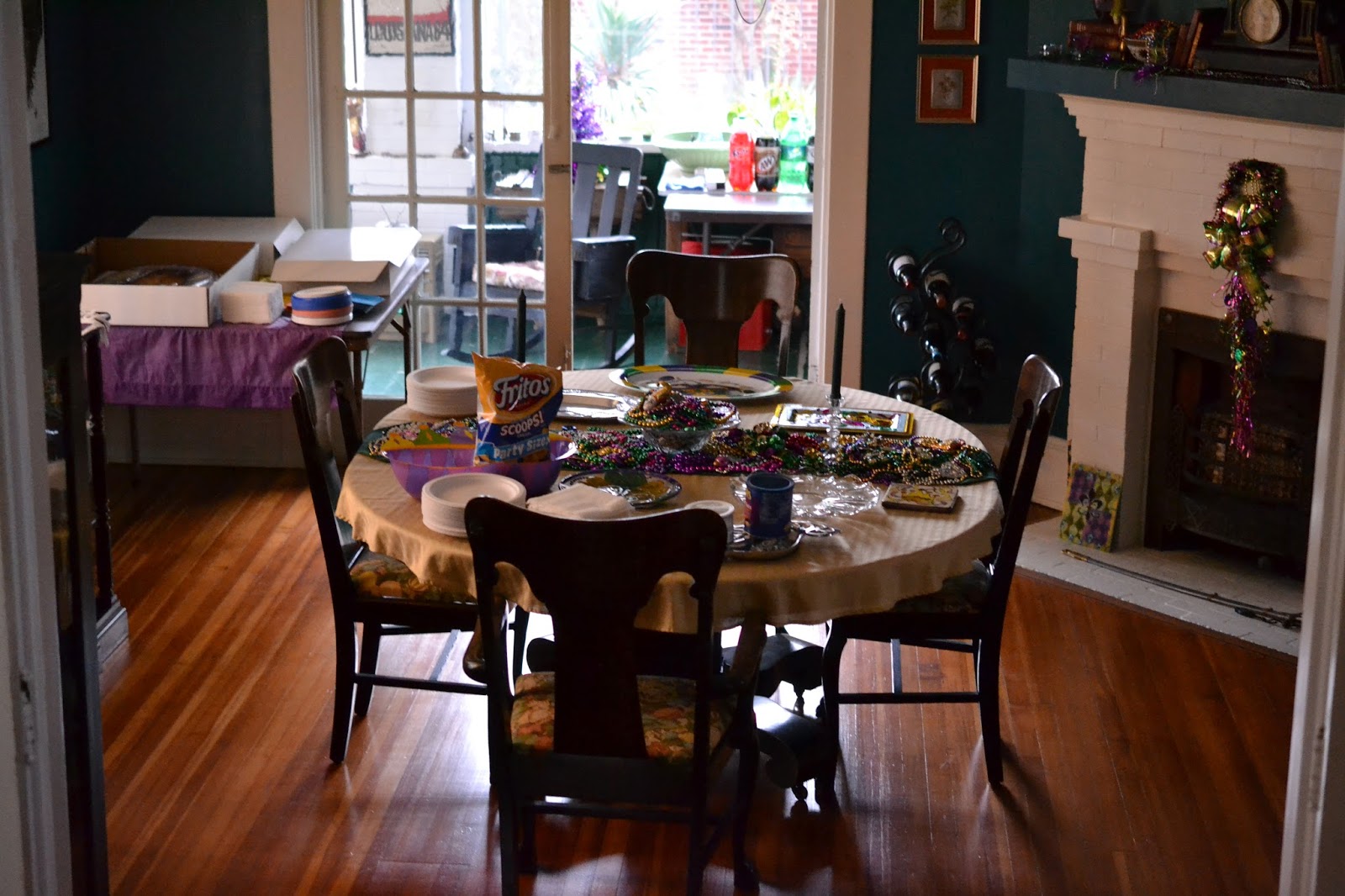 This year’s menu consisted of turkey and seafood gumbo; red beans and rice; shrimp and grits; jalapeno, egg and cheese squares; Rotel dip for nachos; baked brie with cranberry topping and crackers; chips and spinach dip, topped off by multiple king cakes from our neighborhood bakery, Julie Anne’s.  Then friends added to the bounty so every inch of multiple tables ended up covered by food.


For the first time ever, this year’s parade was threatened by severe weather predictions so it started an hour earlier than initially scheduled.  This cut down on the number of people who came to our open house but we still had between 75 and 100 people stop by to visit, eat and watch the parade. Usually it’s more like 150—200!
Video of the Blanc et Noir Marching Society 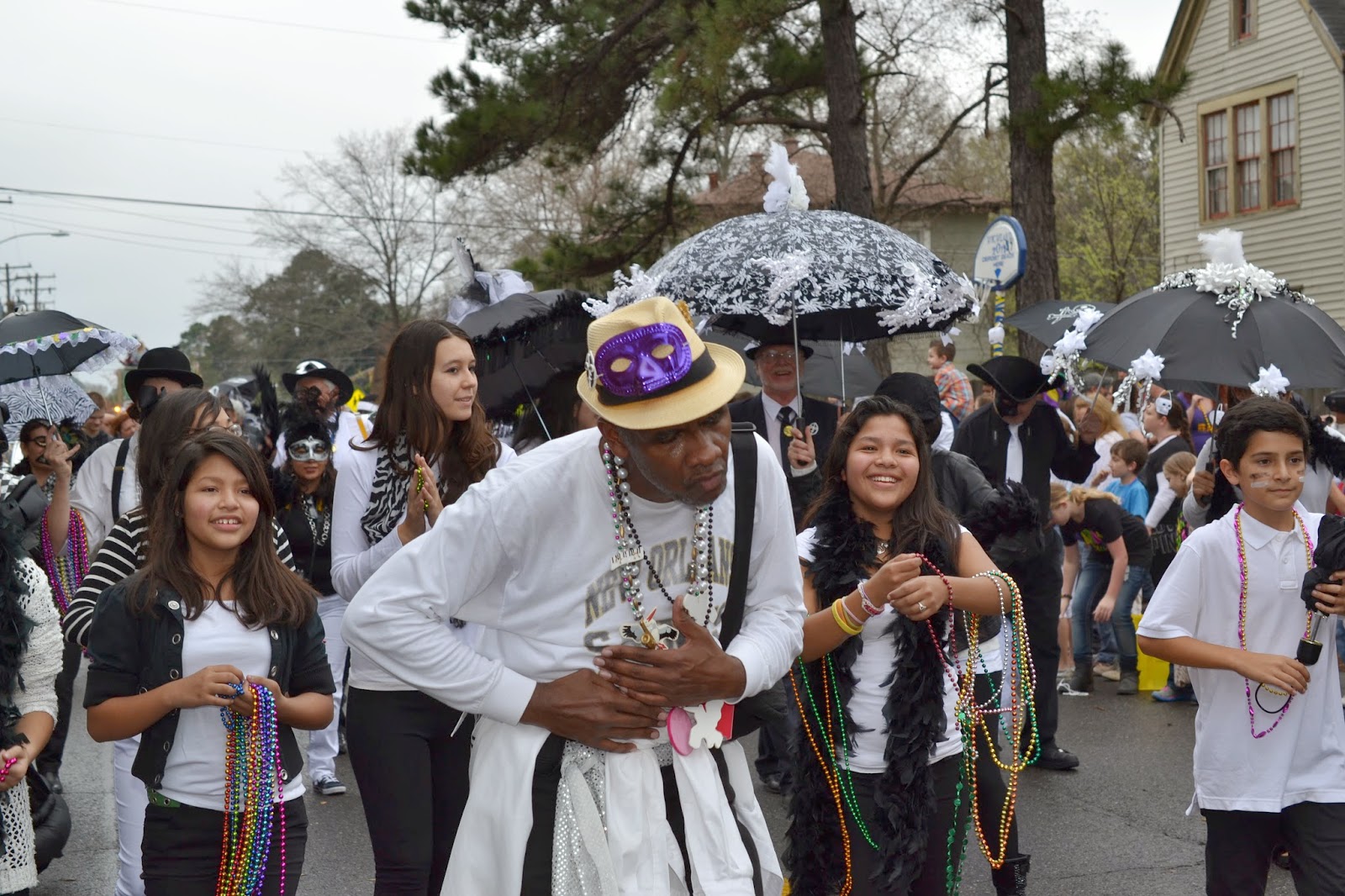 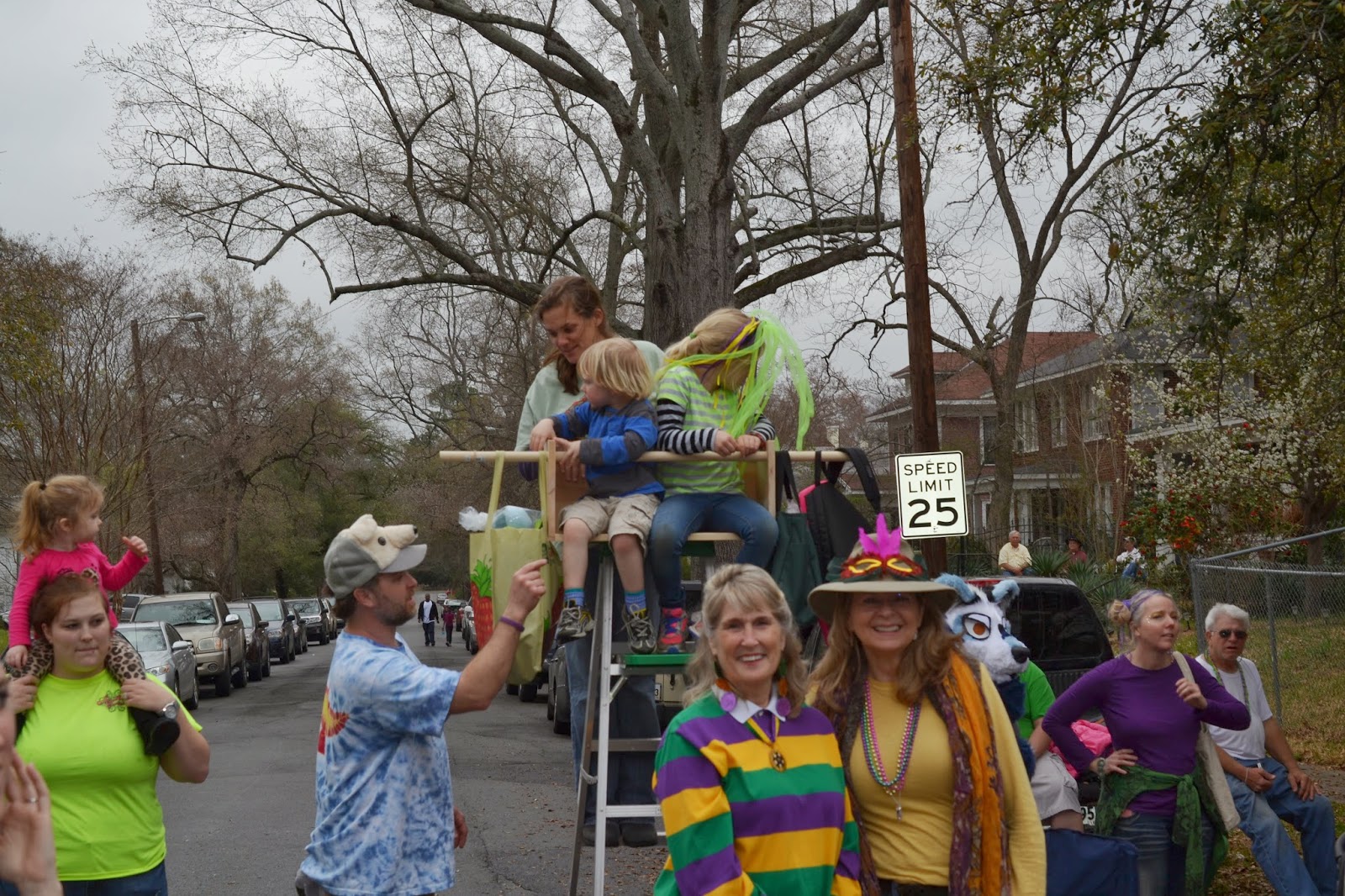 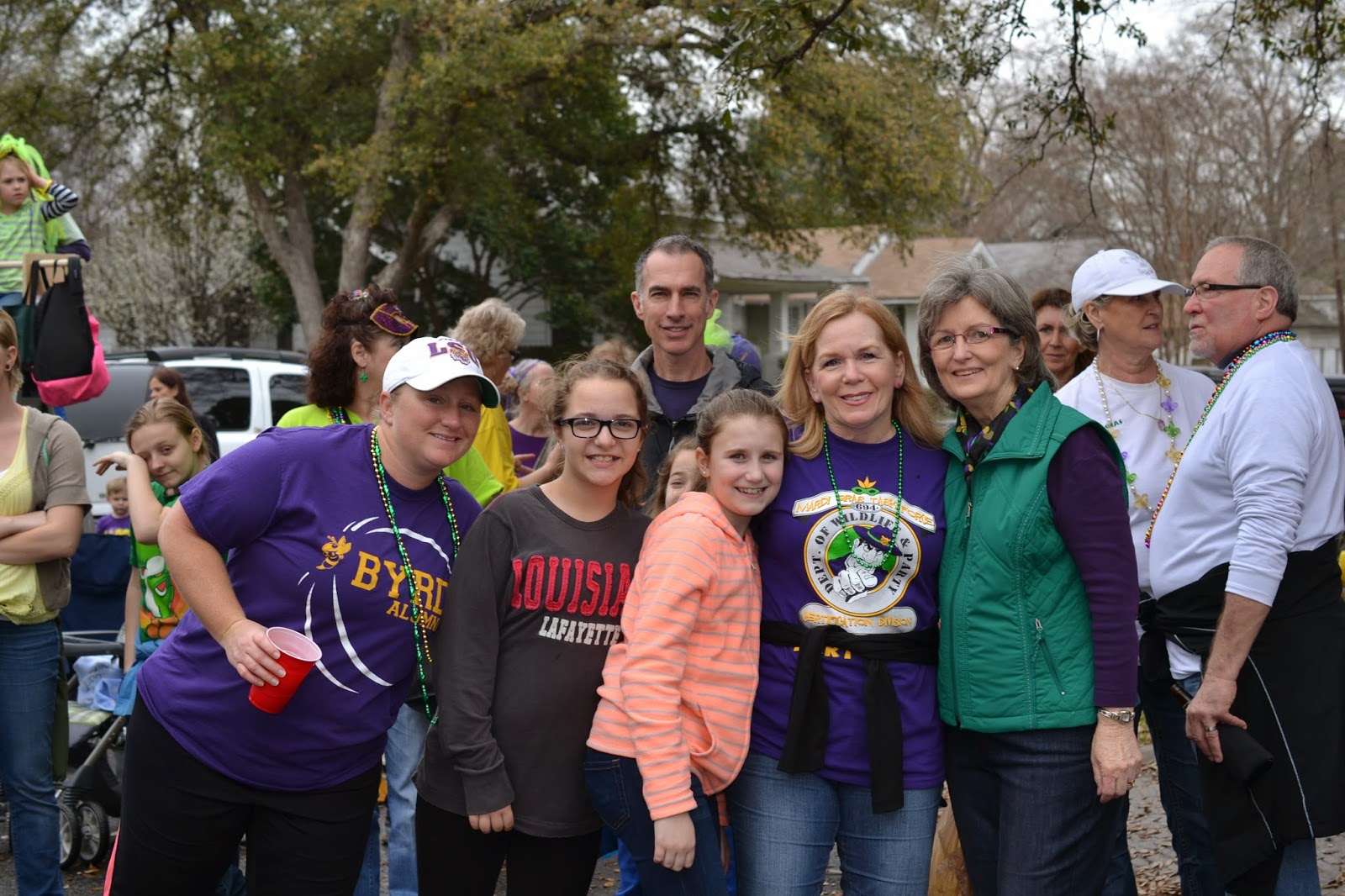 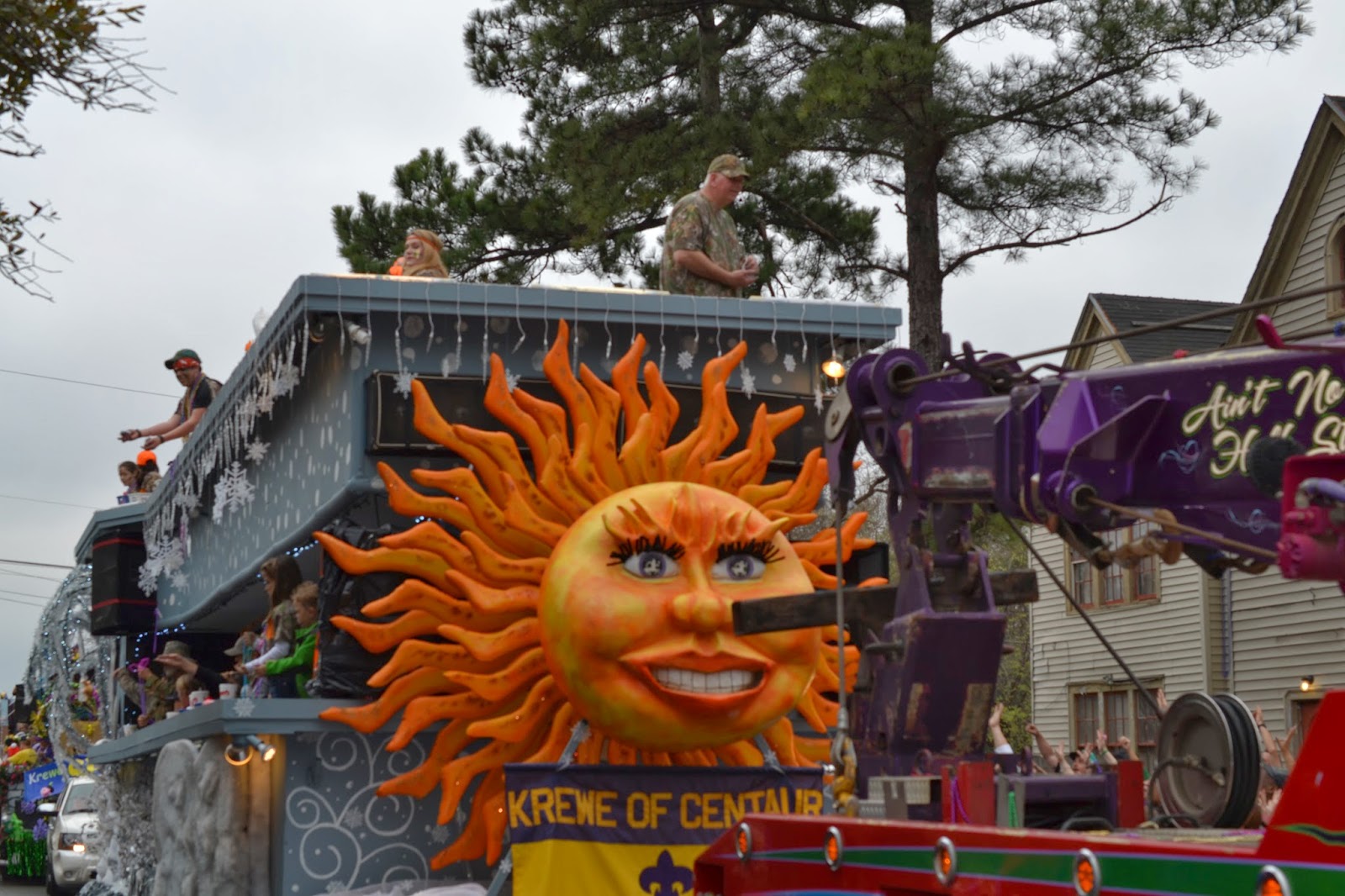 ﻿
The rain held off until the parade was past our house but later on the route, things were a bit damp.  The party started in heat and humidity and air conditioning and ended, after the strong cold front blew through, with my dispensing hot tea to wet parade goers who huddled in the warm kitchen where my vintage Chambers range had kept things toasty.
With this front, winter roared back after Mardi Gras and, since I was too tired to remember that we put all our potted plants out on the patio for Mardi Gras, my container plants experienced some temperatures in the 20’s.  I’m now waiting to see if any of them weathered the winter, or if I have to replace them all this spring.  I’m not complaining, our winter was nothing like the real winter and deep snows endured by many friends and family further north. In Louisiana, the Cedar Waxwings have come and gone, stripping the holly tree and all shrubs of their winter berries, now the flowering quince, the native bridal wreath from the Caroline Dormon Nature Preserve, and our old camellias are blooming.


I am so glad to see the advent of spring in Louisiana, but who can complain about winter when you have carnival to celebrate!