Last week a man left two boxes of books on the porch for our Little Free Library.  As I walked outside to greet the stranger, our dog Treble ran past me and tried to eat or at least intimidate the poor guy. After I rescued the man, I apologized profusely and thanked the now in a hurry to leave man for his donation.

I always sort through books donated and put nonfiction in one box, general fiction in another, mysteries and thrillers together in a box, romances in another, and children’s literature has its own section in our Plant Room where I store books awaiting placement in the LFL.


As I examine the books the man donated, I notice a 1980 compilation of Southern Living recipes. Leafing through the book, I look up cabbage recipes because I have a head of cabbage leftover from New Year’s. Hmmm, cabbage potato chowder catches my attention so I mark the place. 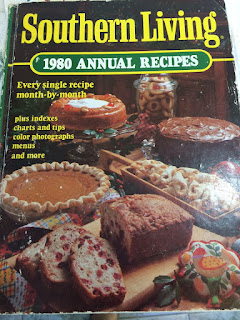 After a brief warm spell, the weather turned cold again in Shreveport so I seriously start thinking about the cabbage and potato soup. I grab the cookbook, then look at a few recipes on-line to see other ideas for potato cabbage soup.  I decide I’ll add carrots and celery to my soup since I have both on hand.

The soup making and nesting process begins. I chop up the carrots, celery,  ½ head of cabbage, and one large Idaho potato. The vegetables steam in a little water until they are getting soft, then I add four cups of chicken broth, a bouillon cube, several cups of milk and heat everything together.  I throw in seasonings—black pepper, a little rosemary, and a heaping teaspoon of Dijon mustard, a stealth ingredient mentioned in an internet recipe.  After everything is hot, I add a partial bag of grated Monterey Jack cheese because it's in refrigerator and needs to be used. Once it melts, soup’s on.
Corn bread, also made using a recipe from the pictured Southern Living cookbook, completes the comfort food duo. Finally I prepare a quick Waldorf Salad to add fruit to the meal. 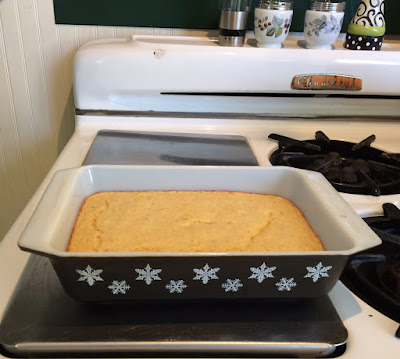 I feel as if I’m channeling a ghostly housewife from years gone by who isn’t quite ready to give up her KP duties, but that’s okay. So far as I can tell, it’s a win, win arrangement.