Once Upon a Time during a Litter Clean-up 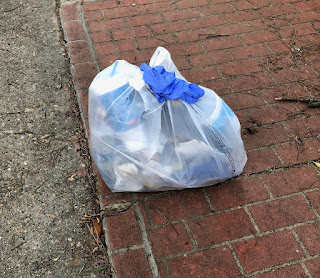 It’s a chilly Saturday morning, and I’m picking up litter in a vacant lot as part of our monthly neighborhood clean-up when an African American man, casually but neatly dressed in blue jeans and a black jacket, walks by me on the street.

He stops and asks me, “Do you belong to that church?” and he points to the large Methodist church a half block away.

“Because my mother, my mother,” the man’s face contorts with an effort to control his emotions. I decide to wait and not say anything once I see he’s trying to talk through tears. I just stand there, trying to look sympathetic. “I just lost my mother,” he finally tells me.

“I’m so sorry,” I respond automatically. I’m really trying to figure out where this conversation is going. Is he going to ask me for money?

I’m sorry,” the man then apologizes to me. “My name is Thibodaux,” and he adds his first name. “I’m from South Louisiana.”

As soon as I hear his name and his accent, I know he’s from deep in south Louisiana. I look at him more closely. Because of his light skin tone and high cheekbones, he looks like he could be part Native American. The South Louisiana Houma tribe has many members who are Indigenous and Black.

Whatever I expected, it wasn’t this. Louisiana Downs, a horse racing track, is across the river in Bossier Parish. Despite our proximity to the track, I don’t know that I’ve ever met a professional jockey before.

I tell him my name. We continue to talk. He says his mother died this year, while his wife passed away from COVID at the first of the pandemic before vaccines. He moved to northwest Louisiana to work at the track, but he was seriously injured when he was thrown from a horse. He had back surgery and now has pins and rods in his back and neck. The injury also affects his hands, and his surgeon told him he needs to go on disability. He says he has a lawyer working on the disability claim.

I tell him I’m an educator but long ago I was in social services. In my mind, I’m trying to think of ways to help this man. “Have you considered Vocational Rehabilitation, so you could be retrained for another job?” I ask.

Mr. Thibodaux ignores my comment about vocational rehabilitation. “My daughter is in social services. She majored in sociology in college. Most of my relatives are teachers.”  Again Mr. Thibodaux surprises me as he talks about his college educated family.

“I majored in sociology, too,” I say. You would think my studies would prevent me from so quickly stereotyping people.

Mr. Thibodaux asks if I’m from Shreveport. “No, I’m from the mountains of Virginia,” I respond.

“I’ve only seen mountains once in my life,” he says, “and that was in New Mexico.”

We continue to talk. I mention vocational rehabilitation again.

“What am I going to be retrained as? I’m 59, all I know is horses. My cousin is a trainer, but I can’t be at the track and not ride,” Mr. Thibodaux says.

“Maybe vocational training that has something to do with computers?” I suggest.

“I can hardly work my phone,” he responds. “My cousin’s 8-year-old daughter was playing with my phone one day when I was over there. She wanted to play a game on my phone and asked me how to find the game. I tell her my phone won’t do that. She looks at me and says, ‘You need to modernize.’  Here’s an 8-year-old telling me to modernize.”  He chuckles, but says he knows nothing about computers. “Why the keyboard isn’t even in alphabetical order,” he says.

Speaking of phones, mine is starting to ping with messages from the rest of the litter clean-up detail, wanting to know where I am. I ignore them for the moment.

Mr. Thibodaux tells me through tears that even though he’s Catholic, his mother told him that as long as he goes to church, he will be okay. That’s why he was inquiring about the large Methodist church in our neighborhood.

He says he made good money as a jockey. Even if he gets disability, it’s hardly anything, he adds.

“I have a two-year-old daughter.”  He spreads his arms out wide, “There’s a big age difference in my children. I want to send my little girl to college like I did my older daughter. How am I going to do that on disability?”

I have no answers except to explore Vocational Rehabilitation options. Finally, Mr. Thibodaux looks at me and says, “I don’t even know what that is.”

“Maybe you just want to start with a free computer class,” I suggest.

“Where do I do that?” he asks. I try to think of options that haven’t been put on hold because of COVID. He tells me someone told him to go to the library. I agree, but I know that all in-person library programming has been paused because of the surge in the Omicron variant here.

Finally, Mr. Thibodaux and I part ways. He is so sweet cautioning be to be careful as I descend an incline to the sidewalk, then tells me not to overdo it.

By the time I start communicating with the rest of my group, I’m kicking myself. I didn’t find out exactly where Mr. Thibodaux lives. He told me the street name, but I forgot to ask for the address. If I knew the address, I could tell him if I find a free computer class that’s currently available. I could see if the assistant pastor at the Methodist church might visit him. Maybe my husband and I could check on him.

I feel like I failed Mr. Thibodaux. I stereotyped him because of some past experiences in the neighborhood, assuming he wanted something from me more than just a human connection. I also messed up when I tried to solve his problem instead of just listening.

I would like to say that I learned an important lesson that changed my behavior, but shortly thereafter as I picked up litter on my way back to the parking lot at the end of the clean-up, out of the corner of my eye I see a man following me. I go on alert—what does he want? I step off the sidewalk and turn around, smiling and saying, “You’ve going to have to go around me, I’m moving slow today.”

Behind me on the sidewalk is a middle-aged Black man who doesn’t appear to have any teeth. His clothes are baggy and worn, but here he is, holding a cold bottle of water out to me. He says something I can’t understand.

He turns without a word and walks away in the opposite direction. I take a big drink of water and berate myself again for assuming that strangers who approach me want money.

My neighborhood is challenged but it never fails to surprise me, and most of the surprises are positive. When will I learn to assume the best of people? Then a persistent voice says, “You still must be careful, sister, you live in an urban neighborhood. You’re doing the best you can.”  But am I?