Stories of the Beat Generation 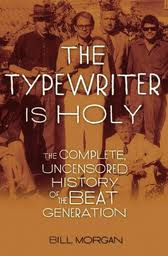 I knew the authors labeled “The Beat Generation” weren’t choirboys.  After reading The Typewriter is Holy: The Complete, Uncensored History of the Beat Generation, by Bill Morgan, I realize the full impact of this group’s self-centered  and self-destructive  behaviors on those around them.

In 1943, Lucien Carr, a troubled and wealthy young man from St. Louis, enrolled in Columbia University where he met Allen Ginsberg.  Carr was a friendly guy and invited Ginsberg to meet some of his Greenwich Village friends.  Through Carr, Ginsberg met William Burroughs and another man, David Krammerer, who like Carr was from a wealthy St. Louis family.   Krammerer was a gay man obsessed with the young, attractive and heterosexual Lucian Carr.  Carr’s circle of friends also included two young women from well-to-do families, Edie “Frankie” Parker, and Joan Vollmer Adams, a young pregnant war bride.  It was through the women that Carr and Ginsberg met Jack Kerouac, as aspiring writer from a working class family who Edie was dating at the time.
﻿

Because Kerouac and Carr wanted to “see the world,” they hatched a plan to become seamen and travel to France, then Paris, where they hoped to live after it was liberated from the Nazis.  Krammerer found out about the proposed adventure and wanted to go along, since he was like an obsessed groupie  when it came to Carr.  After a long night of drinking and arguing about the trip, Carr stabbed Krammerer with a pocket knife and pushed him into the Hudson River, causing him to drown.
﻿
Carr immediately confessed what he had done to Burroughs and Kerouac.  Burroughs advised Carr to contact a lawyer and turn himself in, while the working-class and less worldly Kerouac felt Carr should try to hide all evidence of the crime and then helped him do it.  After a day or so, Carr’s conscience got the better of him and he told his mother's lawyer and turned himself in.  Burroughs and Kerouac were also arrested as material witnesses.
Burroughs, whose grandfather had invented the modern adding machine, was immediately able to post bond and get out of jail.  Kerouac’s father refused to help him, and Kerouac got out of jail only because he and Edie Parker got married and she used her trust fund money to get him out.  They later divorced when Kerouac didn't feel comfortable around her well-to-do family.


Carr avoided serious prison time for killing Krammerer,  because Columbia University and Carr’s lawyers depicted him in court as a young man who was defending himself from an older sexual predator.  Carr spent two years in a reformatory for the crime.  Charges against Kerouac and Burroughs were dropped.
The film, Kill Your Darlings, depicting Allen Ginsberg (Daniel Ratcliff), William Burroughs (Ben Foster), and Jack Kerouac (Jack Huston), is coming to the Robinson Film Center in Shreveport and is based on this incident. 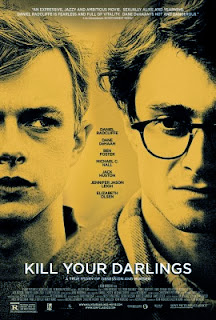 The Carr-Krammerer affair was merely the first of many tragic exploits surrounding this group of writers.  Burroughs, despite being gay, ended up marrying the friend of the writers, Joan Adams.  They were both addicted to drugs and heavy drinkers.  While living in Mexico, Burroughs would accidentally kill Joan—shooting her in the forehead while trying to shoot a whiskey glass off her head.
Many of the circle of friends and acquaintances surrounding the Beat writers were unstable.  One man, Bill Cannastra, who like Burroughs had attended Harvard, boarded a subway in New York after a night of barhopping.  He then decided he wanted to return to the bar after the subway doors had closed.  He tried to crawl out the window after the train started.  He wasn’t totally out the window when the subway reached the end of the platform.  He was knocked out of the window, onto the tracks and crushed by the train in full view of his horrified friends.


One of Cannastra’s closest friends was a woman named Joan Haverty who moved into Cannastra’s loft apartment after his death.  Shortly thereafter,  Kerouac  stopped by the loft looking for Carr. He met Joan and, within two weeks, Kerouac and Joan were married despite the fact neither seemed to be in love with the other.  The marriage ended in divorce, but Joan bore Kerouac a daughter.   Kerouac would spend the rest of his life denying his paternity and trying to avoid paying child support.
There were other well-known friends, such as Neal Cassidy, and those not so well-known.  The Typewriter is Holy explores the interactions of this loosely knit, yet enmeshed, group.  Ginsberg emerges as the most sane of them all, and he was in and out of therapy his whole life.


Along the way, some seminal works of literature were written.  For almost 40 years, author Bill Morgan worked as an editor and archival consultant for nearly every member of the Beat Generation.  He is well-informed about his subject matter, but this was a hard book for me to read.  These are important writers, but the story of their lives and works is like watching a series of train wrecks.
Posted by Teresa at 5:23 PM